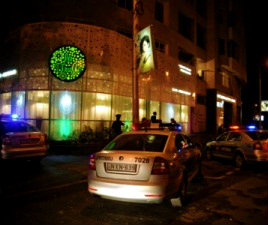 The scuffle at La Truffe involved throwing of cups, plates and ashtrays. (Interpressnews.)

TBILISI, DFWatch–President Mikheil Saakashvili left a restaurant in Tbilisi before there broke out a scuffle between several well-known politicians.

Three members of President Mikheil Saakashvili’s United National Movement (UNM), including two parliamentarians, were physically injured during a fight Saturday night at a prestigious club in downtown Tbilisi. One other person was also injured.

Saakashvili’s party members call the incident politically motivated. However, the person who fought against the UNM members says there was no political background and says that the fight took place because the UNM members insulted a woman who was sitting at the table.

President Mikheil Saakashvili and Vano Merabishvili, Secretary General of the UNM, together with their wives, were also present at this French restaurant called La Truffe, and located near Delisi metro station in Tbilisi; a favorite of the capital’s political elite. Saakashvili left the restaurant early, while Merabishvili and his wife left after the fight started.

The UNM claims that the scuffle was a planned, because one of the persons involved in the incident, Mamuka Bakuria, is the brother of Tsotne Bakuria, leader of the former autocratic governor of the Adjara region, Aslan Abashidze’s Party. He is also a cousin of Tina Khidasheli, wife of speaker of parliament and one of the leaders of the Republican Party, which is a part of Bidzina Ivanishvili’s Georgian Dream coalition.

Bakuria told journalists that he and his two friends, a man and a women, were enjoying some time at the restaurant, when the UNM members insulted them, and that’s how the fight started.

The UNM members say that the other party was drunk and provoked a fight on purpose.

The Interior Ministry has launched an investigation into the case. Several participants in the fight have been questioned, as well as personnel at the restaurant.

Witnesses describe that the fight lasted for 10-15 minutes and involved the throwing of cups, plates and ashtrays; that’s what caused so many injuries.

Law enforcers will question the politicians in the next few days.