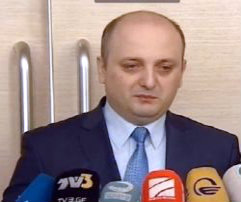 TBILISI, DFWatch–Former President Mikheil Saakashvili yesterday said that Georgian officers will be serving in Ukraine’s armed forces and have been promised Ukrainian citizenship.

But Defense Minister Mindia Janelidze rejects this. He says there hasn’t been a single case of someone from Georgia’s armed forces leaving the country and taking up service in a foreign country’s military.

“You cannot name a single case when our officers left the service and went to another country. Georgian officers serve in our armed forces, they continue to serve, protect the country,” he said on Monday.

Saakashvili claims that a few former officials have been through job interviews in Ukraine in recent days.

But representatives for the Georgian Defense Ministry claim Saakashvili’s statement is baseless. They say several Georgian citizens who served in Georgia’s armed forces in the past are in Ukraine now, but not serving in the military there.

“Our officers won’t stop protecting the security of the homeland and society [in return] for receiving foreign citizenship. They are protecting and will continue to protect Georgia,” the Defense Ministry statement reads.

It goes on to say that the former president is attempting to mislead society.

“The statement by the former commander-in-chief is irresponsible, unjustified propaganda which is directed against his own country and state institutions.”

Irakli Sesiashvili, head of the defense and security committee in parliament, thinks Saakashvili’s statement was ‘irresponsible’ and ‘far from reality’.

“If [Saakashvili] wants to contribute to Ukraine’s combat actions he can go and serve there. He is an irresponsible man and his statement is irresponsible,” Sesiashvili said.

Military officers who want to serve in another country’s armed forces have to end their contract and renounce their Georgian citizenship.