Saakashvili charged in case he considered ‘black stain’ on his reputation

Saakashvili charged in case he considered ‘black stain’ on his reputation 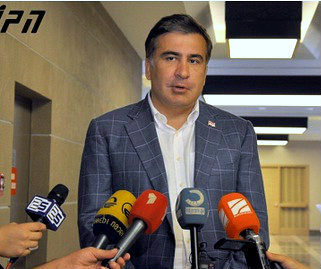 Mikheil Saakashvili considered the Girgvliani case a ‘black stain’ on the history of his time in power. (Interpressnews.)

TBILISI, DFWatch–New charges were brought against former Georgian President Mikheil Saakasvhili on Thursday, related to the murder of a bank employee in 2006.

The investigation into the Sandro Girgvilani murder, which Saakashvili has called the ‘a black stain’ on the history of his government, was begun on recommendation by the European Court of Human Rights and revealed that the case was a ‘systemic crime’, the Prosecutor’s Office said Thursday. 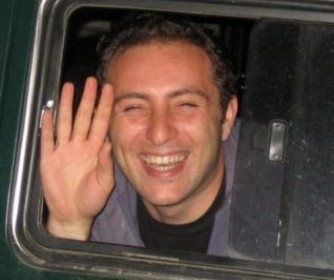 Sandro Girgvliani was 28 years old when he was murdered in 2006. (Interpressnews.)

There has been exposed falsification of investigation results and that high officials were involved in a cover up of the crime, including: Former Minister of Interior Vano Merabishvili, Former Head of the Constitutional Security Department (Kudi) Data Akhalaia, Bacho Akhalaia, who that time chaired that Penitentiary Department and President Mikheil Saakashvili.

January 27, 2006, Alexandre (Sandro) Girgvliani had a quarrel at café Shardin in Tbilisi with Tamar Merabishvili, spouse of Vano Merabishvili and Tatia Maisuradze, sitting at the same table as Data Akhalaia. The latter instructed Kudi officials, who were summoned to the place of the incident, to force Girgvliani and his friend into a car, kidnap them and take them to Okrokana Cemetery on a hill above Tbilisi, the Prosecutor’s Office writes.

The statement goes on to say that Mikheil Saakashvili became interested in the case following a public outcry and was fully aware that the involvement of high officials in the murder ‘would have negatively affected the ratings and the authority of the government.’

“Consequently, the dissatisfaction of the public toward the government would be increased and the issue of political and criminal liability of his affiliates – Ivane Merabishvili, Minister of Interior, and David Akhalaia, Head of the Constitutional Security Department – would be inevitably raised.”

In order to avoid that, investigators claims that with Merabishvili and the Akhalaia brothers gave orders to employees of their subordinate bodies to plan ‘illegal actions’ in order to cover up the crime against Girgvliani and falsify the investigation.

Since the officials involved in crime chaired and carried out the investigation, an objective investigation was not conducted. In the second half of February, 2006, Data Akhalaia summoned employees of Kudi who were involved in the kidnapping and ordered them to take responsibility for the murder, not name those who ordered the crime and high ranking officials. They were promised that they would have soon be pardoned by the president. He also promised that each of their daily problems would be solved and they would provide solid financial resources and other privileges, privileged conditions during their time in jail.

Soon afterward, officials met at the Prosecutor’s Office and decided to also charge one official in order to avoid other officials being held responsible and charged Kudi official Geronty Alania as well. After this, officials met with Saakashvili and were given a promise that he would pardon those charged in the murder.

“After receiving the aforesaid illegal promises, Ivane Merabishvili, David Akhalaia and other officials of the Ministry of Interior planned and led the investigation into the crime committed against Alexandre Girgvliani in a way to ensure that only the middle and lower ranking officials of the Constitutional Security Department would be held liable for the crime committed, while David Akhalaia and others would be illegally diverted from liability,” Prosecutor’s Office writes.

March 6, 2006, they announced the results of the biased investigation, after which Vano Merabishvili met with them in an Interior Ministry pretrial detention cell and ‘celebrated with them’, promising support and that they wouldn’t have any problems.

During their time in jail, all of them enjoyed advantageous conditions and received USD 100,000 each. On November 24, 2008, Saakashvili pardoned those charged in Girgvliani’s murder. They were released after having served three years and nine months.

“Thus, joint and mutually agreed criminal activities of various branches of state power, orchestrated by the President of Georgia, Mikheil Saakashvili, led to the fact that the justice was not administered on the case of Alexandre Girgvliani, the actual circumstances of the case were falsified and David Akhalaia and others were diverted from criminal liability, that caused the substation violation of the rights of Alexandre Girgvliani’s family and the legitimate interests of the state.”

The investigation into the case continues, according to the statement. Vano Merabishvili and Bacho Akhalaia are already charged with falsifying the investigation and creating comfortable conditions for the convicts.

Mikheil Saakashvili is charged in three other cases, but after a recent request by the Prosecutor’s Office, the trials have been postponed until 2015.

His lawyer Otar Kakhidze, who is a former deputy justice minister, says that the court required time to finding evidence.

The Prosecutor’s Office representatives tell DF Watch that there is a lot of investigation work that remains to be done, and for that reason the trials were postponed.

The office charged Saakashvili in three other criminal prosecutions. His and his family’s bank accounts have been frozen, while the former president himself is still abroad.

The first charge introduced against the former president is related to the dispersal of an anti-government rally on Rustaveli Street in 2007. A protest organized by opposition parties was violently dispersed and law enforcements broke into Imedi TV, a company which belonged to the deceased billionaire Badri Patarkatsishvili. Saakashvili was charged in absentia and sentenced to pretrial detention.

Former Interior Minister Vano Merabishvili, former Chief Prosecutor Zurab Adeishvili, Former Defense Minister Davit Kezerashvili and former Mayor of Tbilisi Gigi Ugulava are also charged in the same case. Only Ugulava and Merabishvili are in detention; the others are abroad and wanted.

The second case concerns an attack on former parliamentarian Valeri Gelashvili in 2005.

A third case concerns the embezzlement of more than 8.8 million laris with the former head of Special State Protection Service Teimuraz Janashia. According to the Prosecutor’s Office, Saakashvili and his friends embezzled this money for own pleasure.

Trials in all three cases will start in January.

A spokesperson for Tbilisi City Court told DF Watch that the hearing about violent dispersal of an anti-government rally will be held on January 20. The same day there will be a hearing in the money embezzlement case.

The Gelashvili beating case will be heard on January 8.