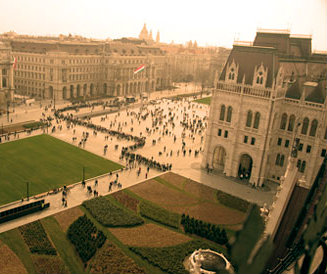 TBILISI, DFWatch–The parliament in Hungary on Tuesday ratified agreements signed with the EU by Georgia, Moldova and Ukraine.

But in fact, 122 MPs supported ratification of Georgia’s association agreement, five voted against, and one abstained, Márton Marnitz at the Hungarian parliament told DF Watch by phone, information which is confirmed on the parliament’s website.

In the vote over Moldova’s agreement, 127 voted yes, six voted no, and there were no abstentions. When it comes to Ukraine, 133 voted yes, none against, and six abstained.

The agreements, which were signed June 27, will harmonize national legislation with that of the EU in return for free trade access to the EUs vast market.

For the agreements to come into force, the countries themselves must ratify them, as must all of EU’s 28 members states, and the European parliament.

Romania was the first state to ratify the treaties, followed by Lithuania, Latvia, Bulgaria and Slovakia. The Georgian parliament ratified the document on July 18.

The European Parliament is set to ratify the agreements in December.