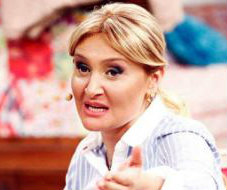 TBILISI, DFWatch–A well-known TV host in the republic of Georgia was Wednesday evening criticized for making discriminating statements about Jehovah’s Witnesses while on air.

One of the guests on Nanuka’s Show, which is aired on Rustavi 2, a TV channel in the former Soviet republic, made disparaging statements about Jehovah’s Witnesses.

He was backed up by the host, Nanuka Zhorzholiani, who made a poor attempt at telling jokes: “Are Jehovah’s witnesses like zombies?” “I’m quite scared that they will hypnotize me.”

These comments by the host were made during an interview with a man who used to be a Jehovah’s Witness, but converted to Orthodox Christianity and criticized his former religion saying it is ‘a dangerous and cruel sect.’

The host apologized on her Facebook page after being strongly criticized in social media. Later in the  evening, the board of the Journalist Ethics Charter sent out a statement about the issue saying that the host violated the Broadcasters’ Code of Conduct, which requires a broadcasters to follow and protect principles of diversity, equality and tolerance, respect freedom of opinion, conscience, religion and belief and avoid insulting ethnic, religious, cultural, social or other groups.

“The board of the charter welcomes that after the reaction from people, the host published explanations, but we still believe she has to do it during her show,” the statement reads, calling on Rustavi 2 to never air this specific program on air or post it on the Internet.

The board also calls on the TV company not to brush away the incident without reaction and let the host explain her own and her guest’s discriminatory statements.

Nanuka Zhorzholiani wrote on her Facebook page that her show is about humans, their stories, and sometimes people might not like their attitudes and life stories, but it is part of their life and any person has a right to make it public or not.

“He was talking about his own religious life and he had this right,” she writes, adding that she read being criticized that she should have stopped the guest while he was telling his story. “It’s not clear how a TV show host can reprimand a respondent for telling about his own life.”

Zhorzholiani writes it is not understandable that no-one must be allowed to speak about positive and negative sides of Jehovah’s Witnesses ‘only because they are a minority in Georgia.’

About her own comments, she wrote that these were jokes about a long story which her responded was telling, but she ‘still accepts the remark.’

In the end of her statement, Zhorzholiani writes that she and the people working on her show completely supports fundamental values of freedom of religion and think that all religious groups are respected parts of society.

There were most discussions about this incident on Facebook, including on Zhorzholiani’s own page, as she posted some pictures from Wednesday’s show. One user wrote that she must have remembered living in a country where ten years ago Jehovah’s Witnesses were harassed and beaten,  and their books were burned, and they still remain stigmatized and ridiculed.

“It is not right to humiliate another religion so publicly, or why should anyone be scared of Jehovah’s Witnesses,” another user wrote.

Some people called on her to invite people to the next show who can in the same manner openly humiliate and harass Orthodox Christianity, as it is most influential religion in Georgia.

Rusudan Gotsiridze, Bishop of the Evangelical Baptist Church of Georgia, also responded to the show by writing that ‘TV stars’ must think of other important issues apart from the show’s ratings.

“I wonder if Nanuka Zhorzholiani thought that tomorrow, Jehovah’s Witness children will be ridiculed with double enthusiasm at school by classmates, while teachers will try with greater fervor to convert them to the ‘true religion’. How many children will dream of dying, how many of them will hate their parents, the teachers, God and the whole world,” she writes.

Rustavi 2 on Thursday issued a statement apologizing ‘if unwittingly religious feelings of Jehovah’s Witnesses were insulted’ on the show.

The statement says that Nanuka’s Show is a TV product produced by Outdoor Studio, and Rustavi 2 doesn’t participate in the creation of the show.

The TV company expressed readiness to ‘timely and effectively’ review any violation of journalistic standards on shows which are aired on Rustavi 2 and any person can make such a request to the company.