Saakashvili back for another US visit

Saakashvili back for another US visit 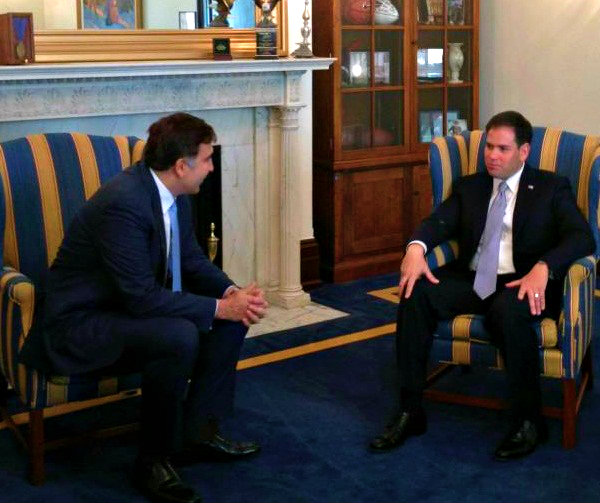 TBILISI, DFWatch–After touring the United States for several days in the beginning of May, President Mikheil Saakashvili is back on an other visit to the country.

He has already had a meeting with Senator Marco Rubio, one of the Republican party’s presidential candidates in 2016. The two discussed current political events and deepening cooperation within the strategic partnership between the US and Georgia.

“Where does this man go, who is he going to and what is he bringing back,” he asked, adding that the visits are not ‘decisive’ at all.

“Ok. Saakashvili went to the US. So what? Now he again plans to visit five or six countries. I want to ask, and society should know: where does he go?” he said in response to a question about when he plans to visit the US. Ivanishvili has been planning to visit the US, but postponed the trip several times.

The PM noted that he doesn’t have any problem visiting any country, including the US.

“But they [the former government] made people get used to the fact that our fate was dependent on visits to Europe and the US, but this is not so. We will decide our fate,” he added, without specifying when he plans to visit the US.

During his visit to Washington, the president told journalists that he is concerned about the PM’s and the new government’s ‘international isolation’. He said there is a vacuum in Georgia in regard to international relations, which only serves the interests of Russia.

The president thinks that the new government has not yet had a ‘serious bilateral meetings’ outside the country, expect in neighboring countries.

“When I was in Poland I asked them to invite the prime minister on an official visit, because they are in the executive government now,” he said. “If they won’t shake hands with Georgia’s prime minister and if there is a situation that Georgia’s government won’t be invited on high official level in leading European countries, we will only be left with the occupant.”

Saakashvili said as long as he is president he will do everything to make the PM also start going on visits abroad, as he thinks the PM needs to have direct conversations. He thinks that the PM shouldn’t be worried about the president’s visits, but should be nervous why he doesn’t or cannot go.

“I appeal to the PM: you should also go. Don’t be worried that I go. When I am no longer president, I will still be invited, due to many factors, but now you should take care of yourself and take care of the fact that the Georgian government is in isolation, in fact, and it is not good for our country.”