Suspect in sex tape leak out on bail and fired

Suspect in sex tape leak out on bail and fired 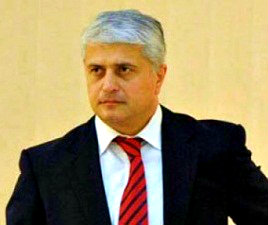 TBILISI, DFWatch–Gela Khvedelidze, the Deputy Interior Minister accused of leaking a sex tape, is free on USD 3 000 bail and has been removed from his position.

Khvedelidze was detained a few days ago for publishing a video with intimate scenes between three people.

Wednesday Tbilisi City Court decided to release him on 5 000 GEL (USD 3000) bail. The court’s spokesperson Eka Areshidze said at a briefing that the court considered that he is charged for a less severe crime and he haven’t been convicted in the past, and at the same time, the prosecutor was unable to prove that it was necessary to keep him detained until the trial.

Khvedelidze is charged under article 57 article of the criminal code, which is about violation of private or family secret. He may be fined or jailed up to three years or deprived of his official post for up to three years. Khvedelidze himself did not attend today’s hearing.

Khvedelidze’s lawyer, Kakhaber Sopromadze, said earlier today that his client would be staying in his post at the ministry, but later a decree dated May 14 and signed by Prime Minister Bidzina Ivanishvili was published on the official government website which said that Khvedelidze had been fired.