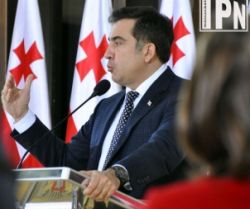 TBILISI, DFWatch–President Mikheil Saakashvili assures foreign diplomats that he is hoping the new government and president will succeed and make the economy boom.

Meeting with foreign diplomats at the president’s palace in Tbilisi on Wednesday to sum up the situation after the election, he wished the new Georgian leadership good luck and says he will be the happiest person if they succeed.

“We moved Georgia from the 137th to the eighth place in the business ratings. If they move Georgia to first place I will only be happy,” he said after the meeting.

“We increased the economy a few times. If they increase it even more, I will be happy.”

He thanked people for giving him a chance to change the country for the better.

Saakashvili said he thinks the results of the recent presidential election were interesting and significant. He said there is a precedent of peaceful transfer of government in the country.

“It is a first, a precedent, that a former ruling party doesn’t disappear despite 25 000 people being questioned, many leaders detained or going through trials. It is a precedent that cohabitation was implemented, with all the difficulties,” he said during the meeting.

He thanked foreign diplomats for assisting Georgia in taking steps forwards and noted that he won’t attend the November 28-29 summit of the European Union’s Eastern Partnership in Vilnius.

“I am very pleased that you foreign diplomats are here. We managed many things together. We are going to the Vilnius summit together, and we want to take the first step there, a more modest one than we planned, but still take a step toward the EU,” he said.

Saakashvili added that he isn’t going to the Vilnius summit himself, because it won’t be his job anymore to do so.