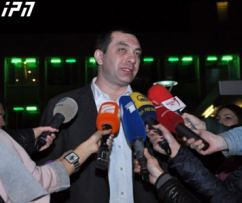 TBILISI, DFWatch–Georgia’s Prosecutor General’s Office Saturday questioned a former ally of ex-President Mikheil Saakashvili on suspicion that he is part a coup plan.

A transcript of an alleged conversation between Saakashvili and Giga Bokeria, former Secretary of the National Security Council, was published on a Ukrainian website.

The authenticity of the transcript published by wikileaks.center is questionable, but the State Security Service launched an investigation about coup attempt, and Bokeria was first to be questioned in the case.

Bokeria Sunday morning commented that the information was just fantasy and he would have considered all the investigation thing ridiculous if not for ongoing events in the country, a reference to a lawsuit about the ownership of television channel Rustavi 2.

Later the same day, Bokeria was summoned to the Prosecutor General’s Office. Meanwhile, his wife, journalist Tamar Chergoleishvili, wrote on her Facebook page that she and her husband met Mikheil Saakashvili at Istanbul airport and was on the same flight as him, before going in different directions.

“People were boarding. Some approached Misha [Mikheil Saakashvili] to take pictures. We chatted with people, laughed about my detention, we laughed pretty loud,” she writes. “Then we went in different directions. We kissed goodbye and were the last to board the plane.”

Bokeria came to the Interior Ministry with his wife. After leaving, he said that he was asked about a transcript published on a Ukrainian website.

“It’s a pity they force our counter-intelligence employees to waste time on this,” he said.