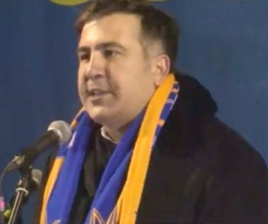 His speech to the movement which started two weeks ago, when President Viktor Yanukovich refused to sign an Association Agreement with the European Union, was delivered in the Ukrainian language.

“Today, I came here, not only in Europe, but at the very center of Europe, at the beating, living, singing heart of Europe,” he said.

He continued that these people are defending the future of Ukraine as well as the future of loving nations of the region and beyond.

“Ukrainian triumph will put an end to Vladimir Putin era, and it will start here, on this very square!”

The ex-president also said that the struggle of Ukrainians is shared by Georgians, who love the Ukrainian people.

Saakashvili said he has no doubt the Ukrainian people will win and change everything, also Russia.

“It will make Russia abdicate its imperialism and it will in the end turn Russia into a nation state, a state that has borders and not margins, partners and not slaves. And with this, Russia, a democratic nation state, we will be a friend we will trade and cooperate with.”

The former leader of the Rose Revolution, which inspired Ukraine’s own Orange Revolution in 2004, arrived from Warsaw with MPs from the European Parliament and held a joint press conference after addressing the protesters.

Saakashvili is not the first foreign politician to visit the protest camps in Kyiv.

U.S. Assistant Secretary of State Victoria Nuland also visited Kiev a few days ago before arriving in Tbilisi. She met with the opposition.

Loreta Grauziniene, Speaker of Parliament in Lithuania, arrived in Ukraine on November 26 and declared her support for the European integration of Ukraine.

Giodo Westerwelle, Foreign Minister of Germany, arrived in Ukraine for an OSCE summit, before which he came and visited the protesters and met with two opposition leaders. He visited Independence Square and European Square in Kyiv.

The visit by leaders from other countries to the demonstrators in Kyiv was condemned by Russia’s PM Dmitry Medvedev, who asked how Germany would have reacted if a Russian foreign minister had visited a crowd violating German laws.

Demonstrators are hoping to mobilize a million people on Sunday. Georgians who support the pro-EU protesters in Ukraine also plan a rally at 14:00 on Sunday in parallel with the mass mobilization in Kyiv. The rally will as usual be held in front of the old parliament building in Tbilisi, where people supporting the Ukrainian demonstrations have gathered every day.