Russian-Turkish détente nothing that Americans should be concerned about: Former US Ambassador to Turkey

Russian-Turkish détente nothing that Americans should be concerned about: Former US Ambassador to Turkey 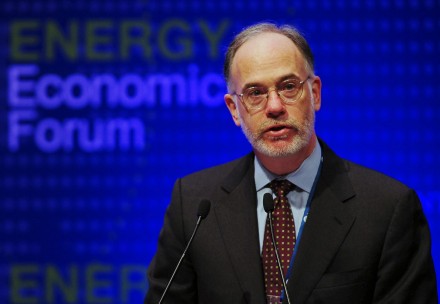 Ross Wilson: ‘It isn’t a sea change in the Turkish-Russian relations’

Ross Wilson, former US Ambassador to Turkey, currently Director of the Dinu Patriciu Eurasia Center at the Atlantic Council in Washington, DC summarizes latest developments in the Turkey-US and Turkey-Russia relations. The interview excerpts ran on the Voice of America’s program. Below is a transcript as recorded by Anna Kalandadze of VoA’s Georgian service.

What are some of the concrete results in US-Turkey relations after the Vice-President Biden’s latest trip to Ankara, has it resolved some of the difficulties in the bilateral context and will it solve the remaining ones?

Ross Wilson: From the press accounts, it appears that the VP’s visit has helped to diffuse the idea in Turkey that US was somehow involved with the coup attempt.  Also, it seems it has helped with the Gulen issue – how specifically, I cannot really tell. But it’s important to me that the US Justice Department officials have met with the Turks several days ago to engage with them on the issue of Gulen and hopefully look forward to resolving that problem.  And third, on Syria, the visit has helped to clearly galvanize more productive relations between Turkey and US against ISIS.  Obviously, there are a lot of complications associated with it but, I am sure, VP’s visit helped to catalyze what we are seeing now.

How would you define an overall importance of the Gulen issue for bilateral relations between US and Turkey, and what are the chances for the extradition of a Muslim cleric to US?

Ross Wilson: Extradition is a complicated legal procedure under US law.  It is not normally a decision that the US Executive Branch – the President – can take on its own. It requires an action by a Court and the Court requires a certain level of evidence – a factual evidence of the crimes the individual is accused of.

I think the task that the Turkish authorities have is to present and work, to some extent, with the US Justice Department to see if a compelling case can be substantiated in a way that will be successful in the US court of law. That process may take a while depending on what information will the Turkish authorities bring to the table.

From the press reports, what the Turkish authorities have brought so far is the material related to the offenses that Gulen is accused of having been involved in prior to the coup. The coup obviously changes things, and should change the way that the US officials look at this.  I think they should be looking now, with the Turkish authorities, what kind of factual information related to the coup plot can be added to the extradition request to make it more likely.

Obviously, American officials understand loud and clear that this is a very important matter for the Turks, as it should be if the allegations that Gulen’s involvement or involvement of the supporters of the Gulen movement are true.

Did you feel that the Turkish people or the government felt betrayed by its allies, just because, according to some local experts, there were conflicting bits of information from Washington, during or in the aftermath of the coup attempt?

Ross Wilson: Well, I think the statements by the Obama Administration officials have been loud, and have been unequivocal in condemning the coup attempt and they were supportive of an elected government, and the democratic institutions in Turkey.  What the voices in US Congress may have said – that, at the end of the day  does not reflect US policy.  What US media have chosen to focus on, it’s an entirely different matter altogether – I personally think its been driven by some of Turkey’s concerns about where the US has stood.  I believe that its absolutely clear to the Turkish government where the US has stood and I think that support is well appreciated.

How would you assess Turkey’s fight against ISIS and its ongoing activities on the Syrian border?

Ross Wilson: The US has been seeking to involve Turkey more deeply in an effort to combat and defeat ISIS in Syria for at least two years now. Over the course of the last year or more, a lot of the discussions have been evolved on the area of Jarablus.  The US was urgently seeking efforts by Turkey to seal the border and to do what’s necessary to help control that area.

For their part, Turks were seeking to deem support inside Turkey for an idea of kind of a no-fly or safe zone, including around this particular area in Jarablus, with a complicated ethnic and political makeup and difficult for the Turkish authorities to control.

So in general, I think this is a long overdue step, its obviously risky for Turkish authorities.  The fact that they have gotten if not a green light, at least acquiescence, from the Russians was important for both – to neutralize potential Russian objections and the Syrian government’s objections.  Clearly this is done in coordination with US which is exactly the way it should be when the two close allies are involved in the matters of such importance.

What future do you foresee Turkey-Russia relations and how will Ankara want to project its power in the region, after the recent developments with the coup attempt?

Ross Wilson: Clearly, Turkish-Russian relations were in a very bad condition in the aftermath of the Turkish shoot-down of a Russian fighter jet last fall.  The Turkish authorities had moved in late Spring – well before a coup attempt, to take steps and try to fix that problem – a pragmatic initiative on the part of the Turkish authorities.  In essence, that is the context in which I view President Erdogan’s visit to Moscow, these are the steps that the Turkish authorities are taking to fix this problem.  It isn’t a sea change in the Turkish-Russian relations, really, it is a relationship that was always important to both countries, it is not a real close relationship but economically and for other reasons its important to both sides and it’s a good thing that its being fixed.

Does it change the way Turkey approaches the rest of the region? Not in a general way but it does relate to the steps that Turkey took with respect to Russia, having made it less risky for Turkey to engage in the Jarablus area in Syria as it is doing now with having more normal and stable relations with Russia. And it’s nothing that Americans should be or are really particularly concerned about.