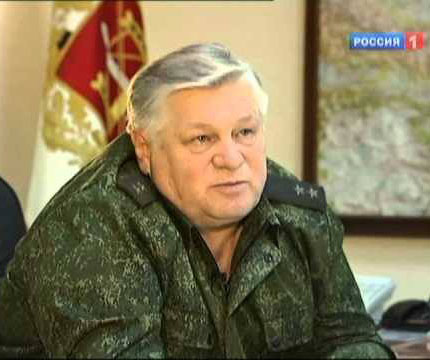 Tbilisi, DFWatch – One of commanders of Russian forces invading Georgia during August War in 2008, has been appointed as a Chief of the General Staff of the breakaway Abkhazia’s army.

“Anatoly Khrulyov expressed his readiness to carry out duties set by the president of Abkhazia,” is said in a statement released by the press office of Raul Khajimba, de facto president of the separatist region, on Monday.

Generally, the position of a Chief of the General Staff of Abkhazia’s armed forces has long been held by the retired Russian generals. Lieutenant general Khrulyov was preceded by Vladimir Vasilchenko, major general (2010-2014), and the latter took the position from the hands of Anatoly Zaitsev, colonel general (2003-2010), who led Abkhazian forces during 2008 war when they occupied without a resistance Kodori Gorge, the only territory in Abkhazia, which had been controlled by the Georgian forces.

During Russo-Georgian blitz war in 2008, General Khrulyov commanded 58th army of the Russian Armed Forces, stationed in the North Caucasus, headquarters in Vladikavkaz, North Ossetia. He was severely wounded in August 9 when his column was hit by the artillery and attacked by the Georgian Special Forces in the outskirts of Tskhinvali.

Few days prior of the Khrulyov appointment in May 15 Raul Khajimba, de facto president, met with Vladimir Putin in Sochi.