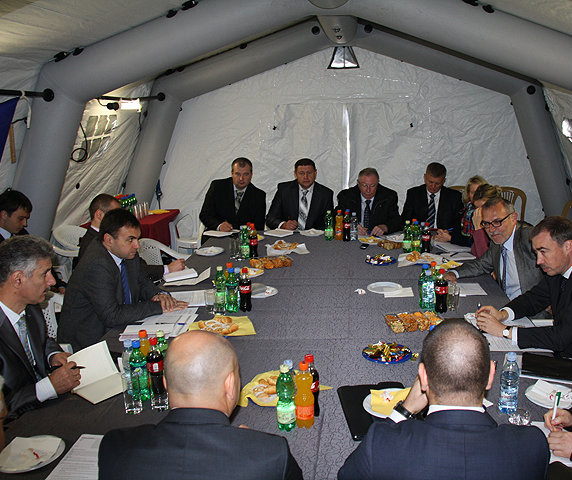 Tuesday’s meeting was facilitated by EUMM’s head, Toivo Klaar, and Ambassador Angelo Gnaedinger from the OSCE. (Photo published by EUMM.)

TBILISI, DFWatch–Russian drones are endangering the security and stability in the region, Georgia’s representatives said at a meeting of the Incident Prevention and Response Mechanism (IPRM) Tuesday.

As DF Watch reported earlier, a Russian unmanned aerial vehicle as well as a helicopter have been observed over Georgian-controlled territory near the breakaway region Abkhazia.

This was the 49th time the warring parties from 2008 met for the regular field meeting, aimed at defusing tension and solving practical problems. The meeting took place in Ergneti near South Ossetia.

Another topic on the agenda was how to restore water supply in the villages, an issue which the parties and agreed to continue working on in the future.

The IPRM meetings are organized by the European Union’s Monitoring Mission in Georgia (EUMM), an unarmed military observer corps established in the aftermath of the 2008 war. Tuesday’s meeting was facilitated by EUMM had Toivo Klaar and OSCE Special Representative Angelo Gnaedinger.

Next IPRM meeting will be held on November 17.

Apart from IPRM meeting conflict parties hold regular meetings in frames of Geneva talks and also since the change of government in 2012 diplomats from Georgia and Russia hold regular bilateral meetings in Prague to speak about mostly trade, economy and humanitarian issues.