Violence against women highlighted at demonstration in Tbilisi

Violence against women highlighted at demonstration in Tbilisi 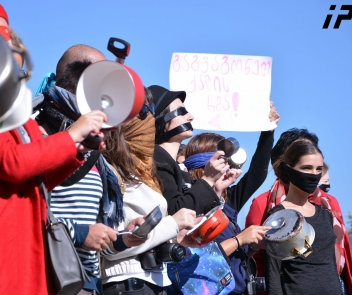 TBILISI, DFWatch–Demonstrators gathered outside the government office on Tuesday to demand better protection of women after what they claim is 23 killings of women this year in incidents of domestic violence.

It is not known who organized the demonstration, but it comes on the heels of a debate about family violence and a shocking murder-suicide at one of Georgia’s top universities.

Media first reported about a wave of family violence in May, when 13 women were killed in the course of a few months.

A few days ago, a man shot his ex-wife and then committed suicide in a corridor of a university in Tbilisi. The case is still subject of discussions about violence against women.

Earlier in October, a man stabbed his sister for not wearing a hijab.

The rally at the government office had form of a performance. Women came wearing scarves over their eyes and mouth because they say women in Georgia are told to be silent because they are women and they must obey, and so the performance is an illustration of that reality.

“Some may not like the fact that women are victims, but it is a fact, and it’s better to describe the truth. We are victims of a culture, pseudo traditions, church, aggressive patriarch,” organizers claim, adding that they wanted to remind the government through their performance that this is their responsibility.

Protesters also brought pans and spoons to make noise. The rally was held on Tuesday to coincide with the funeral of a lecturer at Ilia State University who was shot by her husband.

Meanwhile, the public defender appealed to the parliament speaker to pay particular attention to violence against women as it is becoming a dangerous violent trend. He thinks parliament should discuss this issue and then plan specific steps with members of the government.

Public Defender Ucha Nanuashvili said at a press conference on Tuesday that in most cases, the response from law enforcement bodies has been a letter of warning and not a proper punishment and there have been some cases when certain people wrote letters several times but the violence continued. Nanuashvili has recommended that the government have a proper strategy to fight domestic violence, but no steps have been taken so far.