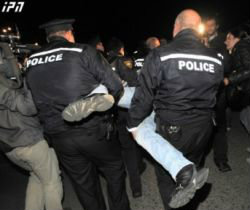 TBILISI, DFWatch–A group of people from the organization Free Generation Tuesday evening demonstrated outside the office of the National Movement, Georgia’s former ruling party, demanding that it is declared illegal.

In the ensuing scuffle, six person were detained for hooliganism and not obeying the police.

Five of the detainees were members of Free Generation.

The organizations activists have been holding protests outside the UNM office for weeks. Tuesday’s scuffle started when protesters threw eggs at the office. Police stopped them, while the sound of the police anthem and the song ‘Misha Magaria’ (“Mikheil [Saakashvili] is cool”) was heard from the UNM office, which probably made protesters angrier.

Before dissolving, the Free Generation activists said they will continue their rallies and the next one will be held in a few days.