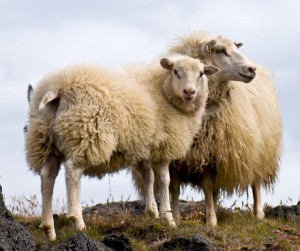 Voters were given a sheep and 20 liters of wine as an Easter gift from Mikheil Saakashvili's political party. (Photo: Thomas Quine.)

TBILISI, DFWatch – Two organizations in Georgia have published information which shows that the party of President Mikheil Saakashvili bribed voters. The groups calls for the Chamber of Control and the Prosecutor’s office to react.

As only five months are left until the parliamentary election, Coalition for Freedom of Choice and Transparency International Georgia released a dossier which they say shows that the National Movement party, which currently holds power, violated the law about financing political parties and the criminal code.

Tamaz Gvelukashvili, Council member from National Movement in the city Rustavi near Tbilisi, sent a sheep and 20 liters of wine each to several districts of the city for Easter, April 15.

TI Georgia interviewed Rustavi population who confirmed this fact. They note that a few days ago, information was gathered about a number of people living in flats, who on Easter day were brought sheep and wine. In some districts employees of Rustavi and Kvemo Kartli governor administration distributed presents, but everywhere it was said that the presents were from Gvelukashvili.

According to the law about political unions of citizens, which was amended at the end of 2011, a party is prohibited from directly or indirectly transferring money, presents and other material things through candidates, representatives or other persons to voters.

The Criminal Law Code’s 164th article defines up to three years in jail or a fine for transferring money or other property with political a intention. Thus, TI Georgian explains that this information might be evidence of a crime having been committed.