Uncertain stalemate between EU and Abkhazia

Uncertain stalemate between EU and Abkhazia 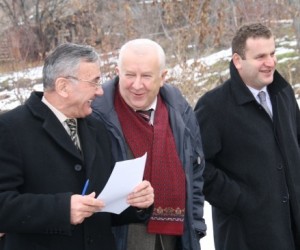 TBILISI, DFWatch – The crisis in the EU’s dealings with a disputed region that broke away from Georgia and is heavily militarized by Russia continues as neither side is willing to give in.

It is therefore uncertain if the meetings in the Incident Prevention and Response Mechanism (IPRM) can continue. These meetings have been held in Georgia’s conflict regions since 2009 and are a way of solving practical problems in the border areas, such as prisoner exchange. They are facilitated by the EU monitoring mission (EUMM) to Georgia.

The April 24 meeting planned in Gali, Abkhazia, was cancelled because of a row over the performance of the head of EUMM, Andrzej Tyszkiewicz. The de facto Abkhazian government is unhappy with how the Polish general has carried out his duties, and in particular that he has not ordered his personnel to investigate six murders which took place in the border areas in November last year and March this year.

The EUMM head set as condition that the observers be given free access within the breakaway region. General Tyszkiewicz is supposed to have said: “Give us access to your territory, and we will get busy with your corpses”, though this is unconfirmed.

Sukhumi perceived Tyszkiewicz’ actions as disrespectful and declared him an unwanted person. The EU however, released a statement saying that the head of mission is not going to be replaced.

“Unfortunately, Mr Tyszkiewicz wasn’t disposed for constructive dialogue with us. He is an experienced military, but other skills are necessary in Caucasus for such dialogues. No country can accept to be insulted. We demand respect for Abkhazia. Tyszkiewicz’ predecessor didn’t share our positions, but he was a real diplomat and felt responsibility for each word,” Irakli Khintba says.

He notes that Abkhazia doesn’t want the IPRM negotiations to stop, but their position about Andrzej Tyszkiewicz won’t be changed, despite how much of a principle it is for Georgia and the EU for him to attend the meetings.

Shota Utiashvili, head of the Analysis Department at the Georgian Internal Affairs Ministry, explains that Abkhazians canceled the meeting out of unacceptable and illegal demands. Before the meeting, each party selected the members of its delegation and no one had a right to intervene in the composition of the other side’s delegation.

“No member of the mission will change. This is a matter of principle,” Utiashvili says.

After the meeting was canceled, Georgia and Russia blamed each other of what happened.

“It is totally unacceptable that Moscow and its proxy regimes are attempting to unilaterally change the format and modalities of the meetings, thus undermining the whole process of the Geneva International Discussions.”

The ministry writes that all issues regarding the procedures and schedule of IPRM, as well as Geneva talks, are preliminarily agreed between all members.

“Responsibility for hampering, or breakdown of the dialogue formats will rest solely with Moscow.”

But the Russian party says Georgia’s statements and accusations towards Abkhazia and Russia are directed at disrupting the atmosphere at the Geneva discussions and tensions in the region.

The Russian foreign ministry also expressed its concern about the canceled Gali meeting.

It supports the Abkhaz position, saying it is logical, because during the last round of Geneva talks, Tyszkiewicz refused to observe incidents in the bordering territory, including murders and ‘with an insulting tone to Abkhazians he demanded to allow observation mission on Abkhazian territory.’

Georgia claims postponement of the Gali meeting was preceded by a number of attempts by Moscow to limit the role of the EUMM and OSCE in Georgia’s other breakaway region South Ossetia as well as barring the entry of EU observers into the two regions and refusing the establishment of a strong UN and OSCE presence on the ground.

Georgia argues that these maneuvers demonstrate that Russia is uncomfortable with a neutral and impartial international presence on the territory of Georgia.

It is currently unclear whether there will be further meetings of the IPRM in Abkhazia, but similar meetings in South Ossetia are continuing unaffected by the stalemate.