TBILISI, DFWatch–Prime Minister Giorgi Kvirikashvili promises that the motorway through Georgia currently under construction will be completed by 2020.

The transit road east-west through Georgia, connecting the border with Azerbaijan with the Turkish border, is a vital transport link in the South Caucasus.

In an interview with Radio Liberty, Kvirikashvili said the goal of the government is to accelerate infrastructure projects.

But a number of mistakes have been detected during talks with the Ministry of Infrastructure and large companies. 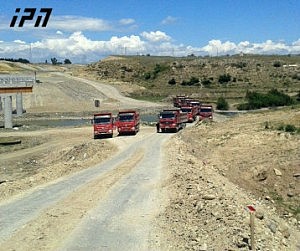 “I can assure you that we will be able to accelerate those projects at least by 35-40 percent,” he said, and added that the main aim is to finish the motorway, a project of international importance, by 2020.

Among the important infrastructure projects which needs to be accelerated, the PM named the section from Mtskheta to Larsi, at the border with Russia, and the road from Kutaisi to Mestia, in the northern Svaneti region of Georgia.