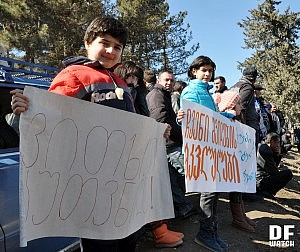 The miners have strong support in their community. (DF Watch.)

TBILISI, DFWatch–Georgian Trade Union has won a lawsuit against RMG Gold, the mining company which destroyed an ancient gold mine at Sakdrisi in December, 2014.

Many locals have been employed in the company, and the jobs sustain families in surrounding villages. In Kazreti there have been fierce protests as the whole community has mobilized to protect their livelihood.

The lawsuit concerned 180 miners who were collectively fired, allegedly because they went on strike.

Locals in Kazreti supported the workers and argue that the decision was detrimental to their community.

Only 13 employees will be be given their jobs back.

The trade union explained on Tuesday that 44 workers were behind the lawsuit against RMG Gold, and that the company put pressure on them to drop the case and promised them to be re-employed as soon as there were vacancies.

The court ruled to reimburse salaries, which haven’t been paid since February 10, 2014, up until the court ruling, as well as paying a 0.007 percent fine for each day of the salary was late. The company will also have to pay court fees, as it lost the case.

RMG Gold refused to comment on the court ruling.