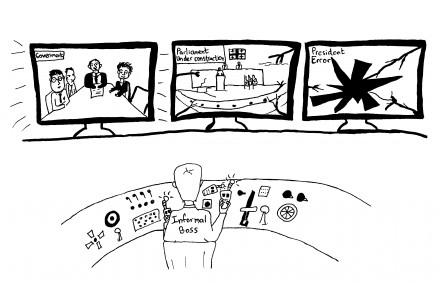 Georgia’s greatest obstacle to becoming a European democracy is the persistence of an informal system of political governance.

Though most welcomed the change of government in 2012, the signs were there early on: When then Prime Minister Bidzina Ivanishvili presented his new interior minister, who would eventually succeed himself as prime minister, few knew who he was. Irakli Garibashvili was just served to the public like when a magician pulls a rabbit out of the hat.

Alarm bells should also have gone off when Ivanishvili handpicked Giorgi Margvelashvili as the Georgian Dream coalition’s candidate for president half a year later, also without any prior public debate.

But what we have seen after Ivanishvili left office as prime minister in October, 2013, is something even more troubling: On the surface of things, he is out of politics and the coalition he created should be let to manage the country on its own, but instead he is exerting an informal influence over the government.

Georgia has ambitiously declares its intention to return to the European family of nations, but such a system of management runs contrary to European values.

What is the way out of this situation? How can Georgia make its formal institutions be the ones that really run the country?

Whether the ruling political team will able to change its style of governing is dependent on how far they dare push democratic reforms in the country. They need to convince the public that the state is developing independent law enforcement bodies and judiciary – the Interior Ministry, the Prosecutor’s Office, the courts – that act independently and abide only by the laws, not by phone calls from the prime minster’s office.

The governing coalition should also make it clear that their decisions are the result of a decision-making process with many participants, not an implementation of the will of the informal leader.

We wonder when the prime minister, any of the ministers, the speaker of parliament or the majority leader will ever state that he or she disagrees with Ivanishvili, without it meaning, in effect, a letter of resignation.