Remittances to Georgia down 12% in December

Remittances to Georgia down 12% in December 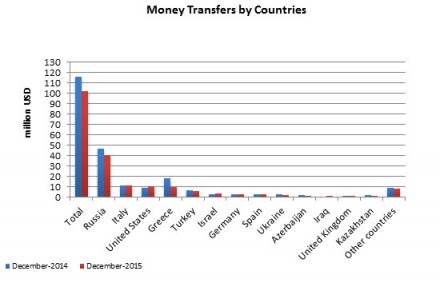 TBILISI, DFWatch–The amount of money sent home by Georgian emigres in December, 2015, was 12.2 percent lower than in the same period the year before.

The total amount of so-called remittances was USD 101.9 million, according to the National Bank.

Russia remains the top country from where money is transferred. Other top originator countries are Italy, the United States, Greece, Turkey, Israel and Germany.

The economic crisis in Greece affected the amount of remittances to Georgia. In December 2014, 15.5 percent of the flow came from Greece, while in the same month of 2015, the share was 9.5 percent.