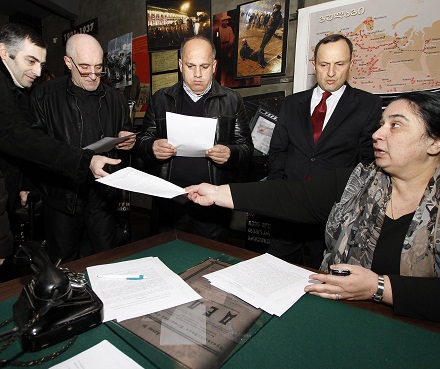 The prisoners released Jan. 13 hold the president responsible for what they went through. Human rights activist Nana Kakabadze (right). (Interpressnews.)

TBILISI, DFWatch — The political prisoners who were released on Sunday demand to impeach President Mikheil Saakashvili.

The former prisoners think a person who allowed having hundreds of political prisoners, and having a torture policy in the prison system, where many people died, should be punished and a first step will be to impeach him.

Another demand is that their case files are made public.

“In addition, we demand to conduct objective and unbiased investigations regarding our cases,” the letter says.

Some of the released prisoners presented their case at a press conference at the Occupation Museum in Tbilisi. They also described the situation in the prisons.

“It wasn’t a prison. It was a place where person went through a slow death,” Levan Gogichaishvili describes. “They created a repressive body which destroyed a person both physically and mentally. People were tortured in extreme degree.”

The ex prisoners want the people involved in illegally arresting them to be punished, but also to conduct new trials in their cases.

190 political prisoners were released on Sunday as a result of enforcing a new law on amnesty. The prison ministry has already sent case files of a further 3 615 prisoners to the courts to have them released.

18 500 cases will be reviewed in total, as part of the amnesty. The whole process will take up to 5 months, according to the ministry.