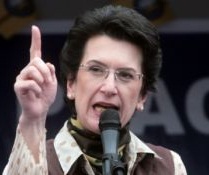 Nino Burjanadze led the May 26 protests in 2011. Now she asks for those imprisoned then to be released. (IPN.)

TBILISI, DFWatch — Leaders of People’s Assembly and Democratic Movement demand the release of political prisoners and illegally arrested people as soon as possible.

Nino Burjanadze, leader of Democratic Movement, and Irakli Batiashvili from People’s Assembly today said they hope a new parliament will raise the issue of releasing the illegally imprisoned and political prisoners.

People’s Assembly organized a protest in front of the parliament building in Tbilisi May 25 2011, and the subsequent police action after midnight that evening, a violent confrontation with tens of arrests, four deaths and almost a hundred injured, was criticized by the international community.

In the weeks leading up to it, the movement experienced police raids of its offices. Before and on May 26, many activists were handed tough prison sentences, some as long as a decade, for engaging in what was intended as a peaceful pro-democracy campaign which, though provocative in style, had broadly the same goals as those which drove Georgian Dream to election victory one week ago.

She said prosecutors, judges and false witnesses should be punished, as they have made those people go to jail.

“There should be made an example for everyone that punishing innocent people should be punished,” Burjanadze said.

“Very soon, there should start the release of illegally imprisoned and political prisoners, as well as returning political refugees,” said Irakli Batiashvili.

He said those who have been punished are expecting this, as are their families and society in general.

Burjanadze said they have met with the coalition which won the election in order to discuss how to manage to review so many cases at once and release the prisoners sooner.