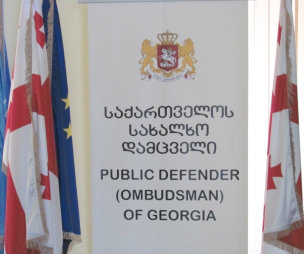 Five of the Public Defender’s staff are out in a dispute about the conditions of former government officials in jail. (Pirveli.)

TBILISI, DFWatch–Three employees at the Public Defender’s office in Georgia have resigned, and two have been fired, after disagreement over a visit to former prison minister Bacho Akhalaia in jail.

Marina Gigineishvili, Amiran Nikolaishvili and Guram Bendiashvili, say they resigned as staff members for the Public Defender after two of their colleagues were fired.

Natia Imnadze and Otar Kvachadze, they say, were fired because they allowed a National Movement activist, Tea Tutberidze, visit Akhalaia in Matrosov prison, a special prison where former officials on trial are being kept under more comfortable conditions than what is the the norm in Georgia.

Imnadze claims that the ombudsman wanted her and Otar Kvachadze not to allow Tutberidze to visit Akhalaia. When they allowed the visit to go ahead, they were fired, Imnadze claims.

Others provided a different reason for the disagreement, and said they were denied to publish a report about illegal surveillance cameras in most of the cells in Matrosov prison.

Public Defender Ucha Nanuashvili responded by calling the accusations absurd. He said Imnadze and Kvachadze were fired for not carrying out clear instructions from the ombudsman.

Nanuashvili says that before they were fired, they received warnings for doing things on their own without coordination with the ombudsman. He rejected the claim that there were some things that weren’t published and said that the findings in prison No 7 were sent to ‘appropriate bodies’ and he requested Imnadze to send additional information, but she didn’t do so.

Nanuashvili thinks Imnadze, who chaired the National Preventive Mechanism at the Public Defender’s Office, and the rest of the employees who resigned are attempting to get back their jobs by complaining to international organizations.

The ombudsman also accuses the former employees of not knowing the law about the ombudsman properly. He said he is not going to make further comments about this issue, but added that Imnadze and others may sue him.