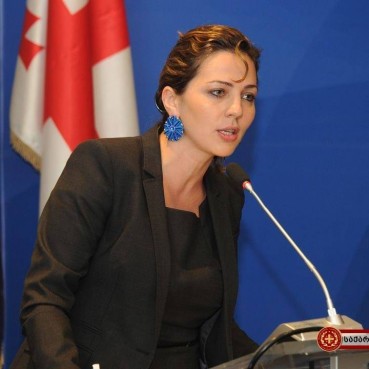 The 2016 Independence Day parade was different from any other. It was different in form and in content. It was, I would like to claim, a parade that most adequately reflected the Georgian spirit. It was both international and originally Georgian. It struck the right balance between cultural and military elements, traditions and creativity — it was modest, yet proud.

There are many features of the 2016 parade worth emphasizing. Here, I would like to stress six specific aspects which are worth underlining, interpreting, and sustaining. It is incredibly difficult to maintain a balance between these features. Yet, I believe, that the balance was successfully struck. Therefore, much gratitude to everyone who took part in creating this beautiful day.

Every year, preceding or following a parade, Georgians debated the symbolism of the day, whether or not the parade displayed the spirit of the country and its direction, whether or not the scale of the celebrations was appropriate. This issue has been most acute since the disbanding of the peaceful demonstration early morning on May 26, 2011, which saw a number of people killed and many more wounded at Rustaveli Avenue. The 2016 parade, I argue, took into account all possible concerns by expressing the appropriate symbolism to emphasize the past of the country, highlight the present, and signal the future direction.

First, one of the most important aspects of the parade was the fact that for the first time in the history of this celebration the ceremony did not take place only in the capital. A number of Georgian regional capitals were also hosting the celebration. Moreover, hundreds of new recruits, who took an oath to the country, were spread out across Georgia’s territory, illustrating the fact that the ceremony was not just an affair of the capital. The reports transmitted back to the central point, which the audience heard in Tbilisi, were touching. They symbolized the unity of Georgia and the tight connection between the capital and the whole of Georgia. Furthermore, the reporting had a touch of military elements in it, giving the audience a sense of unity and order.

The second aspect of the ceremony was a significant presence of foreign elements as participants and not as mere observers of the parade. Performance by military orchestras from our allied countries, performing alongside the Georgian military orchestra, emphasized the extent to which Georgia values the support of her friends. Involving our partners in the performance and creating a new joint ceremony stressed that Georgia considered herself fully embedded in the partnership relationship with her friends. The display of Georgia’s newly NATO accredited force and US produced equipment bore similar significance. May 26 is a celebration of Georgian independence, yet the 2016 parade aimed at showing that independence doesn’t mean loneliness. It can also mean interconnectedness and partnership.

Thirdly, the speech by the Minister of Defense included extensive references to Georgia’s first republic (1918–1921). 98 years ago, the Georgian republic was founded. Although it lasted for only three years, the history and the achievements of the republic are incredibly significant for Georgian statehood. The Constitution of the Republic and the many names of the Republic’s leaders are a great inspiration for contemporary Georgian statehood. The first republic is a source of ideas and empowerment. The Minister’s speech stressed the right legacy of the Republic as a source of pride for the state of Georgia, in general, and its defense forces, in particular. She quoted General Kvinitadze’s famous words a number of times. General Kvinitadze, first Georgian general, who left a brilliant career at the Russian Empire, and took up to lead the Georgian army in very precarious circumstances, is a great example of skill, resolve, and loyalty. He is also a shining example for young Georgians.

The fourth aspect with which the 2016 parade stood out was a significant presence of music at the ceremony. Performances and marches by Georgian and foreign orchestras concluded with a dancing performance by Sukhishvili National Ballet reflects precisely the character of Georgia, and I would say, its Soft Power. Georgia has been a great exporter of culture. My colleague Erik Scott masterfully explains in his book, Familiar Strangers: The Georgian Diaspora and the Evolution of the Soviet Empire (OUP 2016) that it is exactly through culture that Georgian diaspora managed to exercise influence on host societies while finding itself at the epicenter of the Russian Empire and the Soviet Union. Culture is what attracts people to Georgia and then brings them back. The display of a rich culture, whether in performance or the choreography of the marches, is what distinguished the 2016 ceremony from many previous ones and was a precise expression of what Georgians are best at.

Fifthly, those of you who know Georgia are aware of the fact that the balance between civilian and military elements at the Independence Day parade has always been a subject of public debate. Various audiences have expressed different demands in relation to the balance. Some favor more military presence, while others like to emphasize more general aspects of the festivities which every citizen can identify with. The 2016 ceremony struck the right balance between these two values. There was a right amount of display of military pride, which included nationally produced armor and units of the Georgian Armed Forces.

Sixthly, and finally, the ceremony struck just the right balance between modesty and pride. The purpose of every independence parade, quintessentially, is to empower citizens and to foster the sense of pride. Individuals shall leave the ceremony uplifted, elevated to a higher spirit from their daily routines and worries. An independence day is an occasion to reflect on the most positive aspects of one’s history and to draw on these aspects. In order to fulfill these purposes without sacrificing its modesty, every performance requires maintaining a careful balance. To inspire and not to boast is a difficult exercise and perhaps a form of art. The parade of 2016 maintained both of the elements.

Dr. Anna Dolidze is Deputy Minister of Defense of Georgia