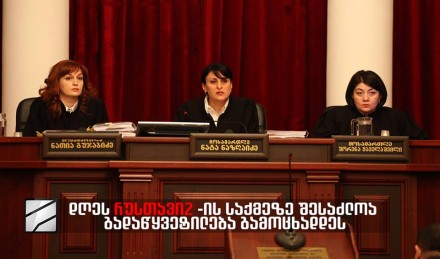 Tbilisi, DFWatch – Appeals court on Tuesday postponed hearing of Rustavi 2 case for Friday, June 3, and its CEO fears the same day the court will issue its decision in favor of the former owner, who, they believe, will strip the Georgia’s main opposition channel its independence.

The Tbilisi City Court in November decided the litigation in favor of Khibar Khalvashi, its former owner, who claims that back in 2006 he was forced to cede Rustavi 2 to the “Saakashvili regime.” If the Appeals Court upholds the decision, Rustavi 2 current management will challenge it at the Supreme Court.

Nika Gvaramia, Rustavi 2 Director general, was expelled from the court on Tuesday by the judge for contempt of court. He claims, the judges are under pressure by the authorities, namely by Thea Tsulukiani, Minister of Justice.

Gvaramia appealed to the President, Speaker of Parliament and Public Defender.

“Wake up, friends, here unprecedented injustice is going on… Wake up and fulfill your constitutional responsibilities!” Gvaramia said.