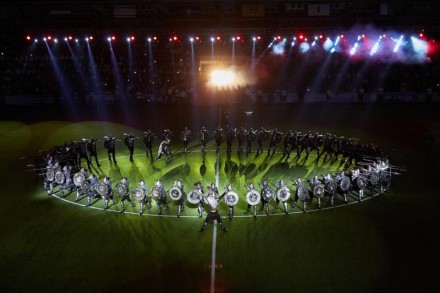 Tbilisi, DFWatch – Teams from twelve stateless peoples and regions without international recognition will compete in a football championship in Abkhazia’s capital of Sukhumi, while ordinary Abkhazians express polarised opinions about the event.

The ConIFA World Football Cup opened on Saturday in Sukhumi, Abkhazia, marking the first time an international sporting event has been held in the ‘republic’.

The competition brings together twelve teams from territories which aren’t internationally recognised as independent countries, making them ineligible for FIFA membership — the gateway to major international football events, like the UEFA Super Cup which was held in Tbilisi last year.

All matches will be played on the newly built Dinamo Stadium in Sukhumi, bringing together teams from Abkhazia, Chagos Islands (a British Overseas Territory), Kurdistan, Northern Cyprus, Padania (a region of north Italy), Panjab (the region in India and Pakistan), Raetia (the borderland between Austria, Germany, and Switzerland), Sápmi (also known as Lapland), Somaliland, Székely Land (the Hungarian-speaking region of Romania), United Koreans in Japan, and Western Armenia. The final match will be played on 5 June.

Three teams were unable to participate in the competition. The Island of Man withdrew due to the UK’s advice against travelling to Abkhazia, the last year’s winner County of Nice declined to participate due to ‘organisational restructuring’, while the South American people of Aymara couldn’t participate due to financial difficulties.

The official song We are free was composed by the Abkhaz performer Alexander Shoua for the event, with lyrics both in English and Abkhaz saying ‘We are free, play with us, show the world seven stars’ which is a reference to the seven stars in the Abkhazian flag symbolising the republic’s seven historical regions.

The event attracted major media attention within Abkhazia and provoked heated debates comments in Abkhazian social networks. It received official endorsement from de facto President Raul Hajymba (better known by the Russian version of his name, Khadzhimba), who participated in the opening ceremony.

Some users of social networks voiced concerns regarding the ‘unrecognised’ format of the competition given Abkhazia’s strong independence aspirations and partial recognition by four UN members, including Russia.

Other users pointed out the high cost of the construction of the stadium, the non-transparent funding process, and the fact that it is located in a residential area close to the Christian Orthodox Annunciation Cathedral.

Positive opinions seem to prevail, though. Many Abkhazian internet users argue that the competition gave the people a chance to engage in festivities and briefly forget about the political and economic hardships of daily life in the republic.

Georgia considers Abkhazia a part of its sovereign territory under Russian occupation. According to Georgian legislation, entering Abkhazia through the border with Russia is punishable by an administrative fine. In case of a repeated offence, the punishment is regulated by the criminal code and may include a time in prison.