Rally in Sokhumi to demand action against drug abuse epidemic

Rally in Sokhumi to demand action against drug abuse epidemic 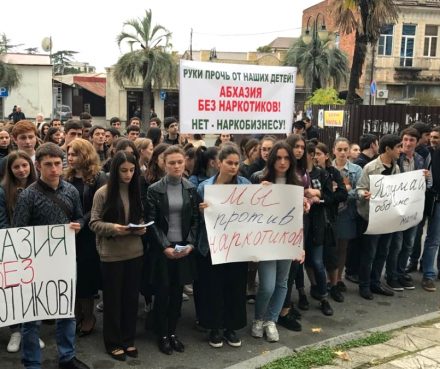 TBILISI, DFWatch–A campaign to demand action against drug addiction brought a large crowd out in the streets of Sokhumi on Thursday, under the slogan “Abkhazia without Drugs”.

The people who had gathered on Sergey Bagapsh Square in the center of the breakaway republic’s capital were mostly youth, and their main message was the “alarming levels” the problem of drug addiction has reached in Abkhazia.

They demanded that the Sokhumi government must strengthen the fight against drug crime in order to “save future generations”.

The de facto education minister who walked out to meet with protesters acknowledged that many young people are hooked to drugs and “we should fight against it together”.

The demonstration was organized by the activist group Social-Psychological Aid Center. The head of the organization Marina Gumba says drug addiction is affecting many families and in order to save the next generation, it is necessary to talk about the problem “much and loudly”.

The Center claims one of the main reasons why the problem persists is that the government does not fight drugs properly and it is very easy to buy them in Abkhazia.

“Of particular concern is the use of drugs among juveniles,” reads the statement of the organizers of the rally, which was sent to the de facto parliament of Abkhazia, demanding to increase the penalty for drug dealers and to lessen the punishment for users.

The protesters claim that the Abkhazian police does not actually fight drug dealers and there is a clear necessity to clean up the law enforcing bodies from top to bottom.

In the summer, the several de facto lawmakers demanded tougher punishment for drug dealing. They consider the current practice unacceptable when drug dealers are being sentenced to only 5 years in prison, or in rare cases to 15 years, and demand life sentence for them.

It is easy and quite cheap to get narcotic substances in Abkhazia. The trade is totally out of control, so drugs are easily accessible for more and more young people.

Accordingly, the number of drug users increases by 200 people every year, according to statistics prepared by the Sokhumi drug center. There are frequent cases of overdose, which leads to formal registering of drug addicts. But the real number of addicts is far higher, local specialists argue.

The trend shows that drug addiction has particularly increased among juveniles, Anua said in June. In the first half of 2016, 32 juveniles aged 12 to 18 underwent drug treatment in the clinic.

Abkhazia is a region of Georgia that broke away after a bloody war in the early 1990s but failed to get international recognition and is still run by a separatist regime increasingly propped up by Russia.