Rally in Tbilisi to demand accountability for Saakashvili regime

Rally in Tbilisi to demand accountability for Saakashvili regime 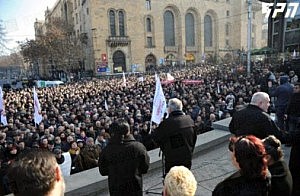 Demonstrators demand to ‘restore justice’ and punish officials that committed violations during the Saakashvili regime. (Interpressnews.)

TBILISI, DFWatch–Over a thousand people demonstrated in central Tbilisi on Saturday, demanding that officials that broke the law during the Saakashvili regime are held to account.

They demand that officials in the Saakashvili regime who committed crimes are punished, that judges who were biased in favor of the National Movement party are fired and that people are allowed to choose a new head of the Supreme Court. 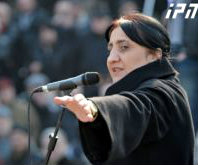 Judges who were loyal to Saakashvili must be fired, Irma Inashvili said. (Interpressnews.)

Protesters gathered at Rustaveli metro station at 3pm, and then walked down Rustaveli Avenue, gathering in front of the old parliament building. Traffic along the avenue was stopped for two hours due to the demonstration.

Political activist Irma Inashvili from Georgia’s Alliance of Patriots, which organized the demonstration, said in her address that everyone should acknowledge what a democratic state is, what democratic institutions are and what the role of the opposition is.

“Everybody, look how many we are. We have come to parliament because we want the government to see how many unsatisfied people there are. These are the people who were victimized by the National Movement, but the government hasn’t done anything in their defense,” Inashvili said, according to Interpressnews. 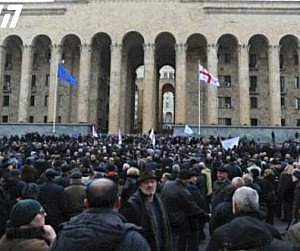 “We want to punish ‘the nationals’ [National Movement members], fire the ‘zonder’ [Saakashvili’s paramilitary, ed.] judges and investigate controversial cases,” she said, adding that people should choose a new head of the Supreme Court, this shouldn’t be decided by one single person.

Inashvili ran as a candidate for Tbilisi mayor in the local election in 2014 and gained about six percent of votes. She is also founder of the media outlet Obiektivi, a radio and television station available on FM, satellite and on the Internet.

“We fought for justice and we will fight until the government fulfils the promise to restore justice,” she vowed.

A speech was also held by recently released Emzar Kvitsiani, leader of the 2006 Kodori mutiny, who according to Imedi’s correspondent said that the demonstration was not against the government, but in order to help the government, and to show to people abroad that people in Georgia want to punish those who in the U.S. and Europe are considered political prisoners.

Also Ia Metreveli addressed the crowd. She is mother of Buta Robakidze, who was killed in a police operation during Saakashvili.

While in opposition, Georgian Dream promised voters to ‘restore justice’, which meant investigating cases of murders, abuse of power, mistreatment in prisons during Saakashvili and punishing those found guilty.

Last week, the businessman Bidzina Ivanishvili who created the coalition said in a TV interview that ‘restoration of justice’ will start in February in terms of violations for property rights.

“At least one billion lari is necessary to compensate citizens affected during the previous government,” he said.

The organizers of Saturday’s rally warned of massive rallies from March if their demands are not met.