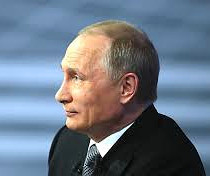 TBILISI, DFWatch–Russian President Vladimir Putin has ratified an agreement to join the military forces of Abkhazia, a breakaway region of Georgia, with the Russian armed forces.

The combined forces agreement signed on November 21, 2015 establishes a joint grouping of armed forces between Russia and Abkhazia to respond to security threats in the region.

“In peacetime, a task force comprised of representatives of the sides undertake the organization of interoperability between the military departments included in the combined forces,” the text of the agreement reads.

The combined forces include a Russian military base in the breakaway territory, while from the Abkhaz side there are two separate motorized rifle battalions, an artillery and aviation group, as well as a special purpose detachment.

Abkhazia is one of three regions of Georgia that tried to gain independence after the collapse of the Soviet Union but failed to achieve recognition. The bloody Abkahzia War in 1992-93 ended in more than 200,000 internally displaced people and a political stalemate that has lasted until today, with Russia propping up the separatist regime in Sukhumi.

Moscow recognized Abkhazia and another region, South Ossetia, as independent states following the 2008 war and set up military bases there. Georgia regards these two territories as occupied by Russia.

A third breakaway region, Adjara, was reintegrated into Georgia in 2004.