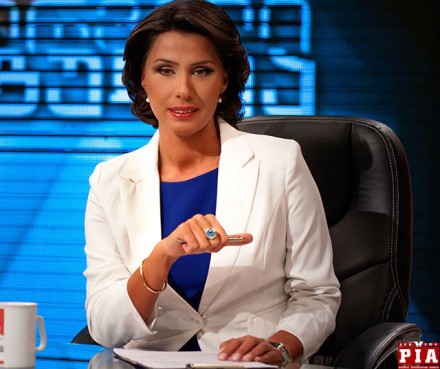 Tbilisi, DFWatch – The fourth weekly political TV programme may be cancelled on Georgia, as the Public Broadcaster (GPB) may suspend Pirveli Studia (“First Studio”), soon after announcement of marriage of its hostess with the Secretary General of opposition political party.

As Basa Janikashvili, GPB CEO advisor, stated during a large media gathering, marriage with Alexi Petriashvili, former Minister for Euro-Atlantic Integration and currently Secretary General Free Democrats, would raise concerns about conflict of interests and make impossible for Eka Mishveladze to stay unbiased during political debates, thus it would be improper for her to host the weekly talk-show.

Free Democrats is a party headed by Irakli Alasania, former Minister of Defense. The party was part of the Georgian Dream coalition, but split from the ruling power in late 2014.

“Congratulations, Kalbatono Eka,” said Basa Janikashvili at the large conference to discuss recent developments in Georgian media – shutting down two popular talk shows on Imedi and a legal action of Rustavi 2 former owner against its current possessors. “I want to remark that according to the broadcasters’ code of ethics, it is improper for a journalist, who is a spouse of political leader, be a host of political show.”

Then Janikashvili read out a passage from the code stating that employee of the GPB shouldn’t cover issues related to his/her family members or close relatives.

Before the meeting there were rumors that the GPB planned shut Eka Mishveladze’s show down, but she was insisting she didn’t know anything.

At the media conference on Friday Basa Janikashvili confirmed the decision.

“I didn’t know if it was so “improper” to get married,” Eka Mishveladze, also present at the conference, responded immediately.

Afterwards Eka Mishveladze said to journalists that she hadn’t  got official confirmation about Pirveli Studia suspension.