Protests in support of ‘the invisibles’

Protests in support of ‘the invisibles’ 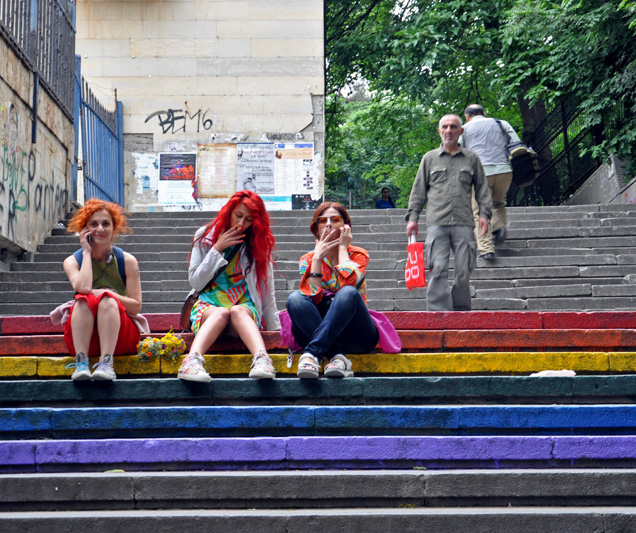 Several protests were held in Tbilisi in support of the ‘invisible’. (DF Watch.)

TBILISI, DFWatch–Several protest events were organized in the streets of Tbilisi on Sunday to express support for gays, lesbians and other sexual minorities.

This followed Saturday’s massive rallies by conservative groups, who marked the newly announced Day of Family Values, instead of International Day Against Homophobia.

The first one was called ‘Protest for invisibles and against invisibility’ and started Sunday morning, lasting until evening.

It consisted of an installation on Pushkin Square in the center of Tbilisi. Hundreds of pairs of shoes were brought and put on the square, with description and explanations on notes attached to trees.

The notes say the protest is against invisibility for those who aren’t visible and their voice is not heard; those who cannot leave their homes or are being followed and have been resettled by governments, banks, families and those who work in vain or are hungry.

“These empty shoes stand here today instead of people who a year ago on May 17 were brave enough to stand against the invisibility of a small group, the LGBT community,” the description reads.

“Those who want to be here to express concern or happiness, but either the government or the community takes care of their voice and existence.”

Another rally named ‘I am Here against Homophobia’ was a protest expressed in notes attached to different places in the capital.

Different messages were printed on pieces of paper with a rainbow symbol in the corner.

“I cannot find a reason to justify your hatred”, “89 percent of Georgia’s LGBT community have been victims of psychological pressure at least once for the last two years,” – these and other messages were written on the notes. (Watch the photos on Facebook here.)

May 17, thousands of Orthodox priests and their supporters rallied in the streets of Tbilisi against the anti-discrimination law which parliament recently adopted. They marked the Day of Family Values, which was announced by the Patriarch.

LGBT activists didn’t conduct a rally on Friday, to avoid a repeat of the violence which took place on the same day a year ago.