Ex-minister in a stable condition after being shot

Ex-minister in a stable condition after being shot 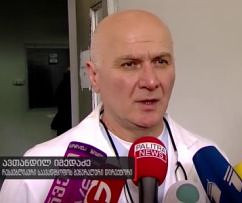 TBILISI, DFWatch–Doctors say former government official and now opposition member Alexi Petriashvili is in a stable condition. He was shot in the legs and abdominal area on Friday at a cemetery in Tbilisi.

The director of the Republican Hospital Avtandil Imedadze told Interpressnews that the patient requires further observation and will remain in intensive care unit for one more day.

Minister of Internal Affairs Giorgi Mghebrishvili told Rustavi 2 that he hopes that the case will soon be solved.

Investigators say the attack took place as Petriashvili was visiting the grave of former diplomat Levan Mikeladze together with three of his friends.

Kakha Sakandelidze, a former deputy health minister, who also was on the grave. He said that the attackers pointed a gun at him and threatened him.

He recalled that two people attacked Petriashvili. One of them was wearing a mask. He said it will be difficult for him to recognize attackers.

Sakandelidze said only one person had a gun but both of them were holding batons.

during session of the Security Council on Saturday, President Giorgi Margvelashvili asked for information about the investigation.

“Mr Alexi is a very close person to all of us. Naturally, we are interested in this case and we are sure that the case will soon be solved,” he said.

“What kind of person are you when you sneak up to a person from behind on a friend’s grave and shoot him to the ground?” he told Rustavi 2, adding that it was a murder attempt.