Protest intensifies as RMG starts digging at ancient mine

Protest intensifies as RMG starts digging at ancient mine 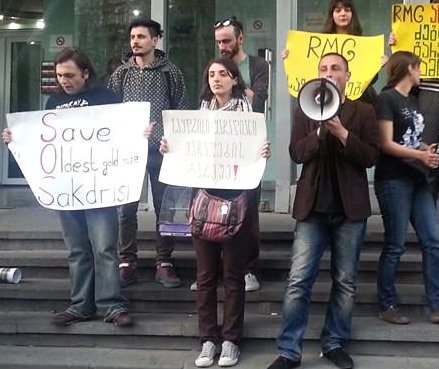 Protesters outside the studios of Georgian Public Broadcaster waiting for the culture minister to arrive to take part in a talk show. (DF Watch.)

TBILISI, DFWatch–Protesters who are camped near an ancient gold mine in southern Georgia say the mining company RMG Gold started excavation work on a section of the mine on Tuesday afternoon, but the Ministry of Internal Affairs denied this.

The tent camp at Sakdrisi was started six days ago by an initiative group of students, non-governmental organizations, scientists and others. Campers have been working shifts walking around in the area, watching what the company is doing to the over five thousand year old mine.

On Saturday, protesters began raising the alarm as trucks started loading soil and driving it away.

“They have done this before, but they said it was for roads and we didn’t raise the alarm, but today we got up on another hill and took footage of them destroying the heritage area,” Natuka Vatsadze, one of the rally participants, told journalists.

They called for the police, who came only an hour later. One of them was dressed in civilian clothes, and they couldn’t produce any proof that they were from the police. The policemen said they don’t have to check Sakdrisi. They didn’t take any testimony from the protesters.

A guard working for RMG Gold is protecting the area and people are not allowed in to see what’s going on.

Several tens of people staying in tents are patrolling the area near the mine.

A rally was organized on Saturday at the office of Georgian Public Broadcaster. They demanded to meet with Culture Minister Guram Odisharia, who was invited to a talk show on Channel 1 TV. Protesters wanted to tell him their demands, which are to not allow RMG Gold to damage the ancient gold mine, to let scientists and researchers study the site carefully and to wait until their conclusions are made public.

Protesters also demand to allow a TV crew from GPB into the Sakdrisi site to film what is going on there right now.

The rally was organized by the youth movement Green Fist and supported by students and environmental activists. They call on the government to protect the mine, as RMG continues excavation work.

The culture minister did not show up at the GPB studio building.

For the last six days, people have been working shifts guarding the Sakdrisi mine, living in tents. On Saturday, there came to scuffles between activists and security guards. Protesters wanted to get up to a hill which would give them a better view to where the digging was taking place, but the guard tried to block their way, claiming that RMG Gold has a license to dig in the area and those people didn’t have a right to enter the site.

A guard hit one of the activists, and there were several verbal and physical confrontations. In the end, the activists didn’t leave the hill but moved their tents there.