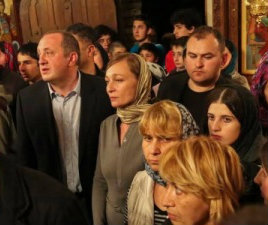 TBILISI, DFWatch–Where and how to observe Easter is important for politicians in Georgia, and this year was no exception.

This Easter, the prime minister and other government members attended Easter Eve service in the recently constructed Trinity (Sameba) Cathedral in Tbilisi,conducted by Patriarch Ilia II.

President Giorgi Margvelashvili attended liturgy in a church in Dusheti, a town close to Tbilisi. Some speculate that his attending church a different place than the government is a sign of a growing split between him and Bidzina Ivanishvili, the businessman who was prime minister the first year after Georgian Dream came to power in October 2012.

Ivanishvili himself was not seen during Easter Eve service, and there have been speculations lately that he is not in the country, but the Georgian Dream coalition denies this.

Members of the National Movement attended Easter Eve in an Orthodox Church, but also visited Catholic and Baptist Churches in Tbilisi. They also congratulated representatives of the Armenian church.

Where and how to attend church is important for politicians in a country where the Church has an especially strong influence over society, as shown repeatedly in polls. Patriarch Ilia II is trusted by more than 97 percent and is popular not only among the Orthodox.

Religion became more popular in the 1980s , in parallel with the emergence of national liberation movements during the Soviet Union and as an expression of national identity.

Even though some Orthodox have extremist attitudes which is causing dissatisfaction among other parts of society, Orthodox Christianity is becoming more and more popular.