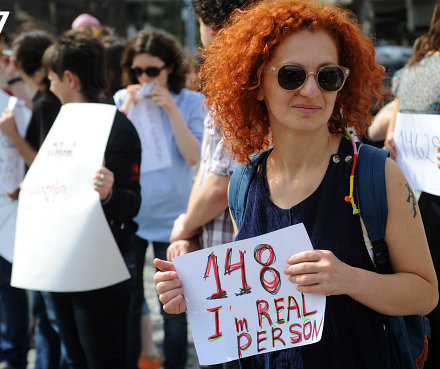 Parliament’s human rights committee has cast doubt on the authenticity of a petition signed by 12 000 people asking for accountability for the violence last month. (Interpressnews.)

TBILISI, DFWatch–June 20 a protest rally was held at Radisson Blu Iveria Hotel while parliament’s human rights committee was holding a meeting inside.

A few days ago, the committee presented a draft statement about the events of May 17, when radical clerics and activists dispersed a peaceful gay rights rally.

People gathered in front of the hotel to protest against the content of the statement and the fact that committee members have tried to cast doubt on the authenticity of the signatures of a petition that 12 000 people have signed, asking the speaker of parliament for a proper reaction to the violence on May 17.

Rally participants told journalists that they think the draft statement doesn’t really condemn the violence on May 17, and doesn’t clearly indicate that the right of assembly and freedom of expression are basic human rights.

People brought posters and a stool, which is symbolic for the May 17 rally, as one of the priests used a stool to attack a bus which police was using to bring LGBT activists into safety.

Committee member Gedevan Popkhadze came and met rally participants and promised them that he will meet with them again today, Friday, to discuss problematic issues.

The head of the committee, Eka Beselia, said she doesn’t understand what people are complaining about. She said that they still only have a draft, not the final version of the document; and therefore it is ‘not correct to make evaluations yet.’

She also said that she is ready to meet with people who have complaints and listen to what issues are problematic.

Concerning the signatures, she said she has received many letters where citizens claim they have signed the petition, and she is not disputing any of them.

“Even a single signature would have been enough for the commission,” she said.

A few days ago, the committee held a discussion about the draft statement in parliament. This debate was attended by two representatives of the National Front, the organization confronting LGBT activists. During the session, one of them, Giorgi Gabedava, said that he found his own name on the list of signatories, even though he hasn’t signed. This is the reason why Beselia said the committee would check the list. Many reacted to the idea of checking the signatures and said that it’s not correct by the human rights committee to question the authenticity of a petition which simply asks to properly investigate acts of violence.