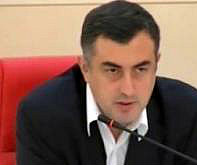 TBILISI, DFWatch–Prosecutors in Georgia have seized the house of a member of the parliamentary opposition on the grounds of an appeal by the businessman Joseph Kay.

Sergo Ratiani, a member of the Untied National Movement, on Thursday went public with what had happened and said the Prosecutor’s Office had seized the house of his party colleague, Giorgi Vashadze, based on an appeal from Kay, a distant relative of Badri Patarkatsishvili, a deceased businessman who ran for president in 2008.

Giorgi Vashadze, an MP from the UNM party, called Kay an ‘international fraud’ in one of his statements, after which Kay sued him. The Prosecutor’s Office seized the house of Vashadze on the grounds of this complaint.

Members of UNM are concerned about this action. They say a public figure has to be more patient, and that the government and the Prosecutor’s Office have gone too far.

“Why is it necessary to seize the house if Vashadze is not running anywhere and it is possible to have a normal trial?,” Ratiani said, adding that those actions are taking place after Prime Minister Bidzina Ivanishvili promised there wouldn’t be any detentions during the election campaign.

On Wednesday, Vashadze said at a briefing that the court has made an unprecedented decision. He said his house was seized because he expressed an opinion.

“The court practice isn’t familiar with the same decision and this is the first time private property is seized in order to satisfy a complaint,” he noted, adding that he plans to appeal the court’s decision and bring another lawsuit for violation of the right to free speech.