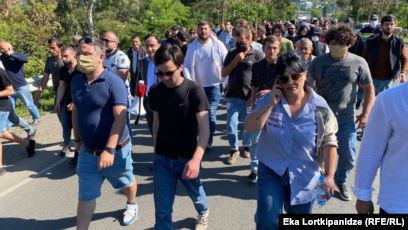 At least nine people were detained in Adjara Friday during a clash between the police and a group of people demanding extradition to Georgia of a prominent mobster.

The clash occurred Friday afternoon after dozens of protesters blocked a road connecting Batumi to the Turkish border. The protesters, mainly relatives and friends of Mindia Goradze, a thief-in-law, urge Georgian authorities to facilitate his extradition due to poor conditions in the Turkish prison where he’s currently being held.

Mindia Goradze, better known by his nickname “Lavasogli”, holds an informal “title” of the thief-in-law, which indicates a rank among the higher tier of the organized crime in the former Soviet states.

He was tried twice in Georgian courts in 2018 and 2019 and sentenced to 10 years prison term for being a member of an organized crime. Georgian law allows law enforcers the prosecution of individuals for only proved membership in organized crime, i.e. being a thief-in-law automatically invokes criminal charges.

Mindia Goradze was detained in Turkey in 2018 and since then expects extradition to Georgia. He’s being currently held in Istanbul prison and, according to his lawyer and the family, is deprived of fundamental human rights.

Georgian authorities, on the other hand, delay his extradition thus posing threat to his life, the family claims.

The Lavasogli family and friends have organized multiple protests during last months.