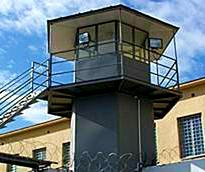 The suspect is working at prison no 16 in Rustavi south of Tbilisi and is accused of trying to help an acquaintance get a prisoner released earlier in return for USD 7,000 bribe.

The prisoner is incarcerated in prison no 17, which is also in Rustavi.

State Security Service (SUS) is investigating the case as attempted fraud which may be punished with 6 to 9 years in jail.