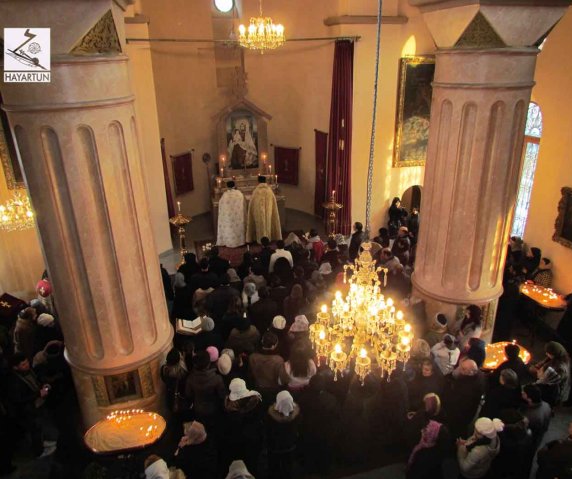 The incident took place inside the Surb Etchmiadzin Church in Tbilisi. (Photo published by the Armenian Diocese.)

The Armenian Orthodox Church says the attack was motivated by religious and ethnic prejudice, but Georgia’s Ministry of Internal Affairs treats the incident as normal crime not related to discrimination.

According to the Diocese of the Armenian Apostolic Orthodox Church in Georgia, July 19, there was an organized attack on Surb Etchmiadzin Church in Tbilisi, motivated by ethnic and regions hatred.

The Church’s statements says a provocation took place at about 16:00. A woman was trying to drive her car out of the area adjacent to the church, but was unsuccessful and started to express dissatisfaction towards the cleric at the Armenian Church as if his car was blocking the way for her own to car in the parking area.

At that moment, two ‘aggressively disposed’ men approached and helped to get the car out. The cleric entered the administrative building of Armenian Church.

Then there were young deacons in the yard, who heard that the men were verbally insulting Armenians. They protested. A man left the car, took a baton and a stone and again insulted and attempted to hit the representatives of the Armenian Diocese.

Hearing a noise from outside, other clerics came out into the yard in order to defuse the situation, when the man hit one of clerics on his back. There was a short fight.

Two hours after the incident, the man returned with a group of about 50 men. Some of them were armed with cold weapons. They approached the church and got into a scuffle with the clerics and employees of the diocese, all the time verbally insulting Armenians. People attending a Christening ceremony inside the church came out into the yard and the men attacked them too.

“Women and children, shocked by what they had seen, hid in the church,” the statement reads. “We must note that a group of nicely dressed people were watching the incident.”

As a result of the attack, clerics and employees of the Armenian Diocese got physical injuries. One of the men tore a cross off one priest and took it with him.

The Armenian Church calls on law enforcement bodies to thoroughly investigate what happened on Saturday as a crime committed on ethnic and religious grounds.

Nino Giorgobiani, Spokesperson for the Ministry of Internal Affairs, told DF Watch that the quarrel took place on ‘everyday grounds’ because the conflict started about the parking of car. She said an investigation has been launched in the incident.

Levon Isakhanyan, head of the department of legal issues, relations with state institutions and interreligious cooperation at the Armenian Apostolic Church in Georgia, told DF Watch that Interior Ministry launched an investigation for beating, which is incorrect. He said that there is footage of the attack, which the diocese will publish soon.

The Armenian Church called on the media to avoid promoting anti-Armenian attitudes in society and also called on Georgia’s Orthodox Church to publicly condemn any actions based on ethnic and religious hatred and preach kindness and love.

“For many centuries, we have have been concerned with the internal stability of Georgia and interethnic and interreligious relations, and we call on the Georgian government to take all necessary measures in order to avoid ethnic and religious separation of Georgian society.”