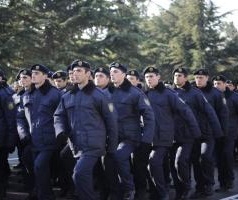 The Special State Protection Service is being turned into a paramilitary force answering directly to President Saakashvili. (IPN.)

TBILISI, DFWatch — The majority in parliament wants the government to take control over the Special State Protection Service (SSPS). Today, this security force answers directly to the president.

Committee chair Eka Beselia from the Georgian Dream coalition explained that the coalition is doing this to ease the president’s work load.

“President should have loads of other work and he really doesn’t need a security service to be his subordinate. That’s why the government should control it,” she said.

The same day, President Saakashvili issued a decree which transforms the SSPS force, often seen lining the streets of Tbilisi as important persons travel through, into a paramilitary unit.

The president’s decree modifies the mandate of the special security force, which provides security around the president and vital state assets. Under the new mandate, it is to be a special paramilitary state body, which provides security within the frames of competence defined by security legislation. The amended mandate has the following wording: Special paramilitary body of executive government directly subordinate to Georgia’s President.

The amendments apply to several articles, including new grounds for disciplinary misconducts.