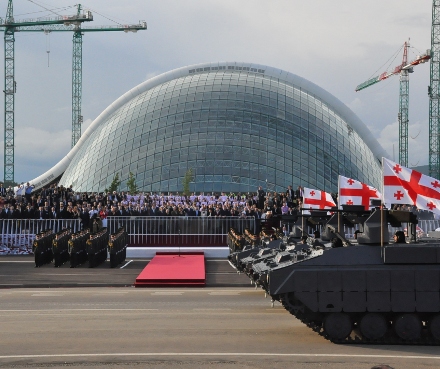 An inquest found that the new parliament building in Kutaisi is owned by a private company. Now, it might be turned into a university. (DFWatch photo.)

TBILISI, DFWatch — The Georgian parliament has decided to study the expenses spent on constructing an entirely new building for the assembly in the city Kutaisi, in western Georgia.

It was a controversial decision from the start to move parliament to the west, made by President Saakashvili. About a year ago, construction work started, but it still has not finished.

There have been questions raised about how much money was spent on constructing the dome structure. That is also why parliament now wants to go through the finances of the project, and has ordered the State Audit Office, formerly known as the Chamber of Control, to carry out an unplanned audit.

Lawmakers have already received a first insight from a special working group which has studied this issue on the order of the parliament speaker. It found that construction work is not yet finished and that the building is the property of a private company.

Another finding was that Kutaisi City Hall gave building permit instead of the Economy Ministry.

The working group which studied the plan found that at the first stage, Kutaisi City Hall allocated money for construction work – nearly USD 39.5 million. At the next stage it was the State Service Bureau Ltd – USD 163.6 million. Neither of them could present a project plan or database of expenses for the construction process.

So far, USD 216.5 million has been spent. A few weeks ago, the minority in parliament asked to allocate more money in order to see the project through to completion, but the majority disagreed and decided to suspend construction work until the fate of the building is known.

The new majority wants to move parliament back to Tbilisi. This will require a constitutional amendment. If that happens, there are several options available for what to do with the new building in Kutaisi. Two of them are to make it into a university and to split parliament into two locations – one in Kutaisi and Tbilisi.