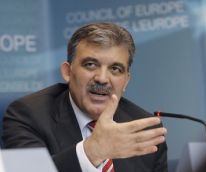 TBILISI, DFWatch–The presidents of Georgia and Turkey have spoken on phone about the latest events in Ukraine.

President of Turkey, Abdullah Gül, and the Georgian President, Giorgi Margvelashvili, underlined the importance of supporting the territorial integrity and sovereignty of Ukraine.

According to Margvelashvili’s press office, they also spoke about protection of human rights in Ukraine and the necessity of solving the crisis through peaceful means. They agreed to continue communicating about the events in Ukraine in the future.

Also on Monday, Margvelashvili spoke with his Polish counterpart, Bronisław Komorowski, also about Ukraine. They discussed ways out of the current situation. The two exchanged invitations to visit each other’s countries.

Earlier on Monday, Vasyl Tsybenko, Ukraine’s Ambassador to Georgia, held a press conference and thanked the government of Georgia for supporting his country.

Tsybenko said he is grateful to Georgia’s president, government and Ministry of Foreign Affairs that they support Ukraine and its people in a difficult period.

He also thanked them for condemning the aggression and recognizing the new government and for expressing readiness to cooperate with it.