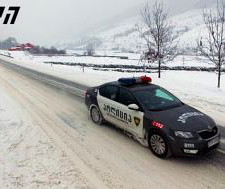 TBILISI, DFWatch–Georgia’s Ministry of Internal Affairs has suspended a police officer who allegedly beat a journalist from Iberia TV a few days ago.

Journalist Giorgi Gasviani two days ago told of how he was beaten by a policeman and two others after his car slipped on the icy road.

The policeman apparently thought the slipping maneuver was an attempt to kill him.

Gasviani further claimed that the police officer was under the influence of alcohol.

The incident happened as the journalist was driving along a road in Borjomi on the way to a seminar about human rights.

The Prosecutor’s Office in Samtskhe Javakheti is investigating it as a case of exceeding official powers and battery.

Witnesses are being questioned and the scene of the incident is being examined. There is also a forensic study underway.