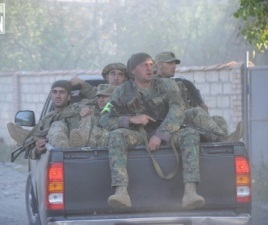 Special Georgian police driving to the border with Russia to take part in an operation inside a forest. (IPN.)

TBILISI, DFWatch – Tuesday night, security forces in Georgia were deployed near the border with Russia after an armed group was spotted in a the area.

The Interior Ministry has blocked access to a valley in Kakheti while while the operation is ongoing and all measures are taken to ensure the security of the local population, the ministry informs.

The operation, which was in was still in progress Wednesday morning, is taking place 30 km away from the village Lapankuri, near the border with Dagestan, one of the constituent republics of the Russian Federation.

The border runs through a forest. Yesterday night local journalists reported that tens of police cars entered into the border forests, driving in police pick-up trucks and military vehicles. Helicopters were patrolling the area as well. Emergency service cars also arrived there.

Locals are connecting the operation to an incident on August 26 when five young persons were declared missing. Yesterday they were discovered and are still being questioned. According to preliminary information they left for fishing and got lost; however family members say they couldn’t have been lost as they are living in the village Lapankuri. Family members speak about kidnapping.

“Local residents report that the militaries are going to block forest, to strike him from air as well. According to some sources, all these preparations have a goal to destroy winter mountain bases of the Mujahideen in Dagestan; according to others, preparing for military action against Georgia,” Ekho Kavkaza writes.

The area of the police operation lies about 50 km east of Pankisi Valley, where Georgian police, assisted by U.S. Advisors, carried out operations against suspected islamist rebels in 2002. Russia has later claimed that Pankisi is still a base for rebels taking part in the insurgency in its North Caucasus republics.