Police: No pressure used against musician

Police: No pressure used against musician 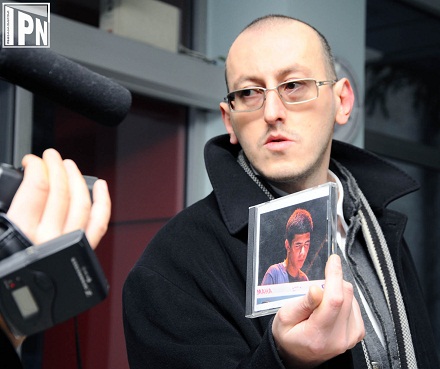 Journalist Lekso Machavariani holds up a photo of musician Beka Gochiashvili during a demonstration in front of Georgian Public Broadcaster January 15, 2013. (Interpressnews.)

TBILISI, DFWatch — The Ministry of Internal Affairs has finished looking into what happened when a well-known musician was questioned, and says it did not find any indications that he was pressured.

Beka Gochiashvili, 16, a jazz pianist who lives in the US but visited his native Georgia for the holidays, was called to the police station January 8 to answer questions regarding a robbery of his neighbor’s house in Tbilisi.

He then told Rustavi 2 that police made threats during his questioning.

The Interior Ministry launched an internal review, but on Wednesday said it had finished looking into the case without finding indications of pressure being used during the interrogation.

The internal review included talking to the investigator who interrogated Beka Gochiashvili, as well as employees who were present at the police station on January 8.

The musician was questioned in the presence of his father. According to the ministry, the Gochiashvilis refused to invite a lawyer to attend the questioning. The musician’s father didn’t express any complaints while his son was being questioned, while the investigator reports that Beka Gochiashvili answered his questions ‘adequately and calmly’.

The same day, January 8, his brother was also questioned regarding the same case.

“After the interrogation they told a friendly goodbye to investigators, which was reflected in Valerian Gochiashvili inviting the investigator to a Beka Gochiashvili concert,” the ministry’s statement reads.

Later on Wednesday, Beka Gochiashvili responded on Facebook, saying that he is sorry that he and his brother got related to a criminal incident.

“It wasn’t my choice to politicize the issue,” he writes, and repeats that he was pressured, subject to insults and threats during his interrogation on January 8.

The musician says that investigators mentioned the names of President Mikheil Saakashvili and the former culture minister, Nika Rurua, during his questioning.

“It remains an unsolved puzzle to me why their names were mentioned during a questioning regarding what it is a banal criminal incident,” he says.

Beka Gochiashvili demands that the full audio and video of his questioning is immediately published.