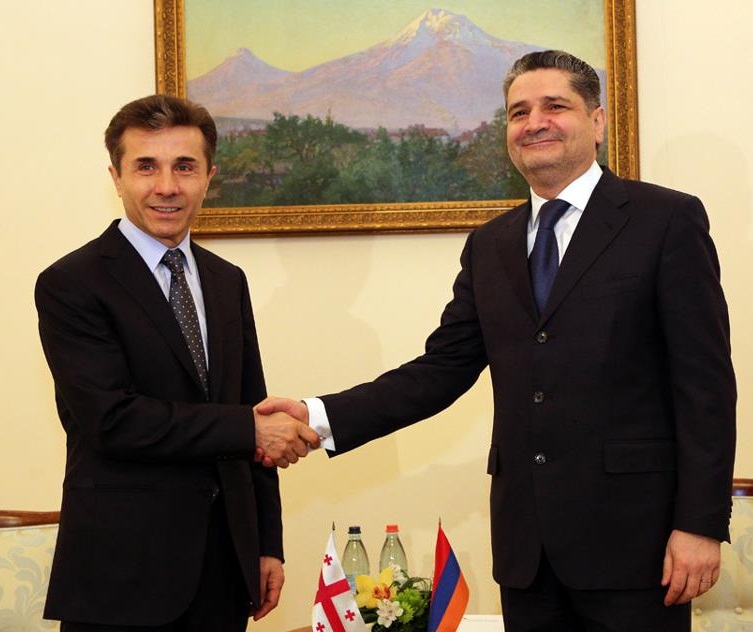 TBILISI, DFWatch — A common economic market between Georgia and Armenia. This was one of the tangible results of a visit by Georgia’s Prime Minister Bidzina Ivanishvili to neighboring Armenia Thursday.

He was accompanied on his official visit by a government delegation which included the Foreign Affairs Minister, Ministers of Finance, Economy, Energy, Prison Minister and Reintegration Minister.

A welcome ceremony was organized at the airport, where Ivanishvili was greeted by his Armenian colleague, Tigran Sargsyan.

The two held a meeting at the government building to discuss political and economic relations, and perspectives on deepening cooperation.

After the initial meeting, an expanded meeting was held between the Georgian and Armenian governments.

The Georgian Prime Minister also met with the Armenian president, and both expressed hope that the good neighborly policy will continue and deepen in the future. A dinner was held after the meeting with the president.

The Georgian and Armenian representatives signed a program for cultural cooperation in 2013 and 2014. Another agreement regarding customs check-points was also signed.

At a joint press conference of prime ministers, the Georgian PM said he supports a peaceful solution to the Karabakh conflict.

“Both parties should use all efforts to solve the Karabakh conflict in peaceful way. I met with the Azerbaijanian president and I introduced his position about Karabakh to the Armenian prime minister,” he said.

Tigran Sargsyan addressed the recent misunderstanding regarding a misquote of the Georgian Foreign Affairs Minister in media.

“I’m thankful to the Georgian side as they immediately reacted the incorrect interpretations of the Georgian official’s quotations in the media. Official Tbilisi immediately clarified the situation,” he said.

At the press conference, the Georgian PM said his Armenian colleague had proposed an initiative about creating a common market and that he liked the initiative.

“It will be good if we integrate our markets. It will simplify common economic growth,” he said.

“There is a large potential between our countries to have common economic development,” Tigran Sargsyan noted. “A common group will be set up, which will work on economic issues.”

Bidzina Ivanishvili will meet with the Armenian Patriarch and at the end of the visit, the Armenian Prime Minister will organize a dinner.