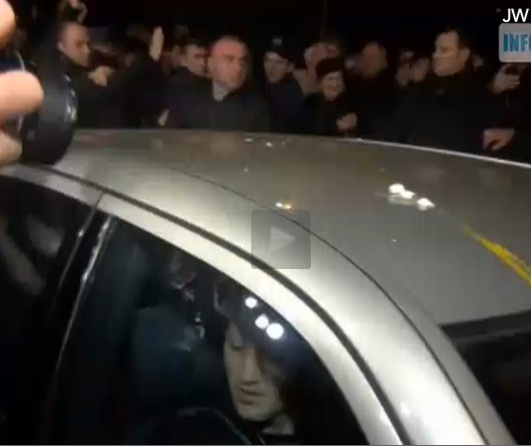 Eggs were thrown on the car of National Movement parliamentarian Akaki Bobokhidze after the last public hearing, which was in Zugdidi Jan. 15. (Info9.)

TBILISI, DFWatch — Another public hearing is ongoing in Kutaisi to discuss constitutional amendments about changing the location of parliament and limiting the president’s power.

Members of parliament from the majority Georgian Dream and the minority National Movement have already held a hearing in Zugdidi, which turned into an egg-throwing exercise as MP Akaki Bobokhidze’s car got hit while he was about to leave. Two people were fined USD 60 for the egg-throwing.

Now, police are mobilized to protect the perimeter as MPs have come to the city where a new parliament building was opened less than a year ago and which the constitution defines as the seat of parliament, an article which the governing coalition wants to change.

MPs are gathered together with non-government organizations at Hotel Bagrati to discuss, first, an amendment about deciding the location of parliament. Today, the location is given as Kutaisi after a decision by the president.

But the Georgian Dream coalition wants to either move parliament back to Tbilisi, or possibly remove the section of the constitution which defines the location of parliament altogether, so that it will be possible to conduct plenary or unscheduled sessions outside of Tbilisi, anywhere in Georgia, including in Kutaisi.

Secondly, the hearing is about a constitutional amendment limiting the power of the president. There are talks that the president may cause a political crisis by using his powers under the constitution.

Georgian Dream wants to expand the period in which the president is allowed to dismiss parliament, so he could do it already now.

After today’s hearing, parliamentarians are heading back on the trail for further public meetings in Tbilisi, Ozurgeti, Batumi, Gori, Rustavi, Telavi and Akhaltsikhe from January 22 to January 26.