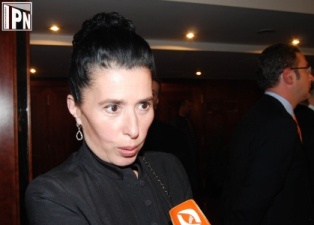 TBILISI, DFWatch–Police in Georgia on Sunday arrested two persons in the management of the construction company Center Point and tried to arrest a third who was not at home.

Two of them were arrested in the morning, while later representatives of the Prosecutor General’s Office showed up at the house of former director Guka Rcheulishvili with an arrest warrant, but he wasn’t at home.

The Prosecutor General’s Office confirmed the arrest of the first two, but not Rcheulishvili. Spokesperson Natia Sukhiashvili said the reasons for the arrests will be given in a statement Monday, which will also outline the investigation.

The two who were arrested are Irakli Mindeli, head of an investment project in Batumi, and Salome Charkviali, sales manager of Center Point, according to the company’s founder Maya Rcheulishvili. She said an arrest warrant was issued for her son Guka Rcheulishvili, but he wasn’t in the apartment on Chitadze Street in Tbilisi when an attempt was made to apprehend him.

“It is about the project Magnolia in Batumi, which was completed and people live there. Guka Rcheulishvili has nothing to do with this,” Rcheulishvili said, adding that it is political persecution. She doesn’t rule out the possibility of herself being detained.

After the parliamentary election in 2012, when Archil Kbilashvili was chief prosecutor, the Prosecutor General’s Office launched a fraud investigation against the founders of Center Point. Maia Rcheulishvili says Kbilashvili had personal motives.

“We had common business interests with Archil Kbilashvili and a building which we constructed close to Marriott. Because of a misunderstanding he decided to take revenge after he became chief prosecutor. Kbilashvili, as a former business partner, wouldn’t have been a neutral person,” she said.

Center Point is one of the largest construction companies in Georgia, and has 70 subsidiaries.

There complaints against Center Point have been building for many years, and a victim’s group for people affected by the company organizes demonstrations from time to time about how they have been lied to.

In a report published in 2012, Transparency International Georgia called an investigation into the scandal. The report explains that officials in the National Movement government were involved with the company Center Point Group, who used and misspent USD 310 million of 6,200 families paid for constructing the apartments.

“The status and connections in the former government of the United National Movement (UNM) raise concerns that these UNM connections helped the founders of Center Point Group avoid personal liability for the damages inflicted on their customers,” the report reads.

Vakhtang Rcheulishvili, the husband of Maia Rcheulishvili, was vice speaker of parliament and head of the Socialist Party, a member of the government coalition during Eduard Shevardnadze’s presidency.