Georgia will stay in Afghanistan until the mission is completed

Georgia will stay in Afghanistan until the mission is completed 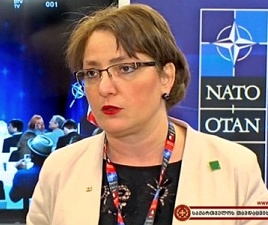 TBILISI, DFWatch–Georgia will continue its participation in the NATO mission in Afghanistan, Defense Minister Tina Khidasheli said at the alliance’s summit in Warsaw.

A meeting was held between heads of state from countries that participate in the mission in Afghanistan.

In his speech, Georgian President Giorgi Margvelashvili confirmed that Georgia will continue its participation in NATO’s Resolute Support mission in Afghanistan.

The South Caucasus country will remain in Afghanistan until the mission there is over, Defense Minister Khidasheli made clear. Also present was head of Georgia’s joint military staff Vakhtang Kapanadze

In his speech, president Margvelashvili spoke about the role of Georgia in the Afghanistan mission, saying that despite having its territories occupied, Georgia remains one of the most important contributors and the will of Georgians remains the same – to join the alliance.

During the press conference after a session of the  North Atlantic Council, the secretary general assured that the alliance remains firm about its decision at the 2008 Bucharest summit that Georgia will join NATO some time in the future. He also informed that he plans to visit Georgia in fall, which will be another confirmation of NATO’s support on the way to joining the alliance.

A cross-party declaration by six of the largest political parties confirmed that membership in NATO and EU remains Georgia’s foreign policy goal, but the declaration was not signed by one member of the ruling Georgian Dream coalition; the Industrialists party. The latest opinion poll published by the U.S. organization NDI shows that two thirds of Georgians support NATO membership for their country.